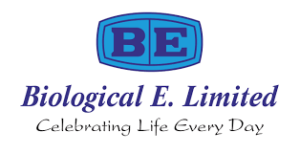 Biological E limited is a privately held biopharmaceutical company based in Hyderabad, Telangana, India. It specialises in the areas of low-cost vaccine production.The company was founded by Dr. D.V.K. Raju and Mr. G.A.N. Raju in 1953 as Biological Products Private Limited. It was among the first private sector companies in India to manufacture biological products. It pioneered Heparin production in India.In 1964, Evans Medicals, a U.K based Pharma Company, which later got merged with Glaxo SmithKline acquired 40% stake in the company, which was subsequently bought back by the promoters in 1995.During the 1960s and 70s, Biological E developed formulations in cough and digestive enzymes, started manufacturing anti-tetanus serum, and launched anti-TB drugs, TT and DTP vaccines.