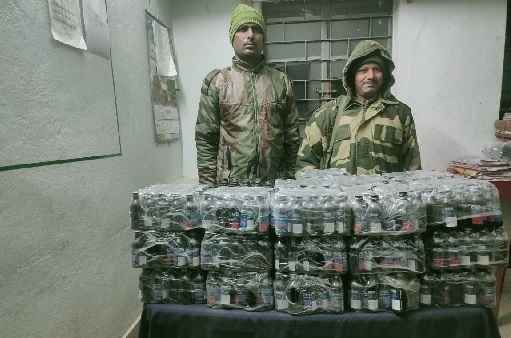 Malda : On 1st January 2023, troops of the Border Out Post Mahadipur,70 Battalion deployed on the Border under South Bengal Frontier, seized 995 bottles of Phensedyl from their area. The jawans on duty noticed that some smugglers were moving towards the Border. When the jawans chased them, they left behind some bags and ran away. When the jawans thoroughly searched the area said Phensedyl bottles recovered from there.

In other incidents, jawans of Border Out Post Tungi and Gede 54 Battalion and Border Out Post Mamabhagina and Chauhatia 68 Battalion seized 477 bottles of Phensedyl, 03 kg Ganja and 15 bottles of liquor from their area of ​​responsibility. The estimated value of all seized Phensedyl bottles in all cases is ₹ 3, 02,217/-.

The seized goods were handed over to Custom Office Malda and Banpur and Police Station Bagdah respectively.

Spokesman of South Bengal Frontier stated that BSF jawans always perform their duty keeping vigil on the Border due to which smugglers do not get success in their ill-intentioned activities. He further stated that both the BSF and the local Police are working together to apprehend the smugglers.