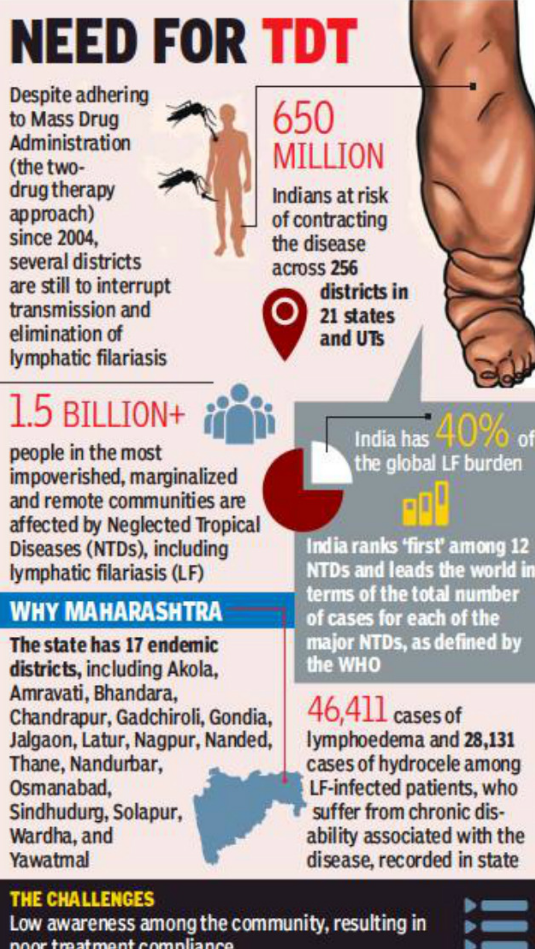 PUNE: The Union government has approved the roll-out of the WHO-recommended new triple-drug therapy (TDT) in four select districts, including one in Maharashtra, to eliminate lymphatic filariasis (LF) from the country.

TDT, which uses Ivermectin, Diethylcarbamazine Citrate (DEC) and Albendazole, will also be rolled out in one district each in Uttar Pradesh, Bihar and Jharkhand.

Centre to roll out triple-drug therapy to eliminate filaria

The studies carried out in other countries have shown that TDT is more effective than the existing two-drug therapy in permanently eliminating the micro-filariae infection. Thus, it becomes all the more important for a country like India, which bears approximately 40% of the global LF burden. In India, 650 million are people at the risk of contracting the disease across 256 districts in 21 states and Union Territories.

A senior health official from the Union health ministry said, “The Indian Council of Medical Research (ICMR) has recommended a phased introduction of TDT, following study trials by the Vector Control Research Centre (VCRC), Puducherry, which showed the safety and efficacy of the new drug therapy. It will soon be rolled out.”

Veteran epidemiologist Kapa D Ramaiah said, “Global and Indian clinical trials have shown that a single dose of triple-drug therapy cleared more than 95% microfilaria load in infected people. With such an excellent effect, annual mass TDT can eliminate LF from endemic communities in two to three years. This will enable India to effectively meet the target set by WHO to eliminate LF by 2020.”

The Maharashtra chief minister’s (CM) office sent a letter to the National Vector Borne Disease Control Programme (NVBDCP) expressing interest in rolling out TDT in the state’s endemic districts. This means that Maharashtra could well become the first Indian state to adopt the therapy and achieve the elimination of LF by 2020.

“TDT will soon be rolled in the endemic districts of Maharashtra. These districts are mainly in the Vidarbha region. We are awaiting guidelines from the Union health ministry in this regard. It will help accelerate elimination efforts,” MS Diggikar, joint director (vector-borne diseases), state health department, said.

The biggest challenges on the ground include alarmingly low awareness and negligible attention given to eliminating LF in public and political discourse, experts said.