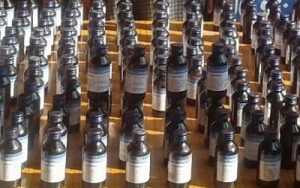 In a major breakthrough against drug peddlers, police on Monday apprehended seven drug peddlers with haul of drug consignments meant for the youth of Jammu and Kashmir. According to report, Gandhi Nagar Police along with SOG held barricades at NaiBasti and Panama Chowk. at Panama Chowk, driver of Truck (JK14D/5478), Liaquat Ali, son of Fareed Ahmed, resident of Bagar, Doda was stopped and while checking 500 bottles of Corex were recovered from the possession of four occupants including Liaquat. The other three have been identified as Irshad Ahmed, son of Mahtab Din, resident of Batote, Rakesh Sharma, son of Paras Ram, resident of Jogwan, Akhnoor and Atom Singh, son of Krishan Chand, resident of DharamKund, Ramban. Meanwhile,at another checkpoint, a Truck (UK08CA/3716) driven by Parvez Ahmed, son of Mir Hussain, resident of HandarvaBaderabad, Haridwar was stopped and on checking 150 bottles of Corex and 8,200 capsules of Spasma-Proxivon (Wochardt) recovered from the possession of three occupants including driver Parvez Ahmed. The accomplices of driver have been identified as Raju Pandit, son of Amika Pandit, resident of Panchrukhi, Tehsil Ramnagar District Bajia, Uttarakhand, at present Rajouri and Abdul Rehman, son of Iqbal Ahmed, resident of Haridwar, Kalyan Sharief Uttarakhand.