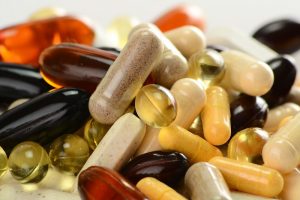 Indian market is flooded with dietary supplements and neutraceuticals containing vitamins, minerals, essential elements, proteins etc. whereas these products comes under the definitions of drug as prescribed u/s 3(b) of Drug Act. Definition of drugs as provided u/s 3(b) of Drugs Act clearly states that, “Drug includes all medicines for internal or external use of human beings or animals and all substances intended to be used for or in the diagnosis, treatment, mitigation or prevention of any disease or disorder in human beings or animals, including preparations applied on human body for the purpose of repelling insects like mosquitoes.” Since these products are used for both prophylactic and therapeutic purposes and their dosages/strengths of individual ingredients/vitamins/ minerals/essential elements etc. have been provided in the table under Schedule V of Drugs Act. These two provisions definition of Drug u/s 3(b) of Drugs Act and classification of strength/dosage under Schedule V clearly indicates that these are Drugs. Drugs Act also provides Good Manufacturing Practices and requirements of premises, plant and equipments for pharmaceutical products i.e. Drug under Schedule M read with Rule 71, 74, 76 and 78. These provisions under revised Schedule M are made quite stringent to attain the required quality of Drugs/pharmaceutical preparations produced in these premises/factories. These requires specific atmospheric conditions which are obtained by providing Air Handling Units etc. this also avoid contamination from outside and cross contamination.
It is also worthwhile to mention that while approving new Drugs, the Drug Controller General of India has approved many such combinations of vitamins/ minerals/essential elements etc. to be manufactured as Drugs which clearly indicates that the combinations of vitamins/ minerals/essential elements etc. which are not approved by Drug Controller General (India) are not allowed to be manufactured for marketing in India. Apart from this approval from Drug Controller General (India), Govt. of India through its agency National Pharmaceuticals Pricing Authority under Drug Price Control Order, 2015 (an order under Section 2 of Essential Commodities Act) has fixed the ceiling prices of many of such combinations to put a cap on the profit of the manufacturers/wholesalers/retailers. This has been done by Govt. of India following a formula prescribed under the said Drug Price Control Order.
To avoid the rigors of area, building, machinery, equipments, facilities under Schedule M, regular inspections under Drugs Act, mandatory approvals from concerned Licensing Authorities (Drugs) and above all that ceiling prices under Drugs Price Control Order, the manufacturers generally resort to manufacture these Drugs under the garb of food supplements and neutraceuticals.

Food supplements are controlled under the Food Safety and Standards Act, 2006. Before this there was provision of Prevention of Food Adulteration Act, 1954 which has been now repealed by FSS Act, 2006. Under this comprehensive legislation for food products, the definition of food is provided under Section 3 (j) of said FSS Act, 2006. Definition of food is wide enough as provided under the Act and reproduced as under:-

“Food means any substance, whether processed, partially processed or unprocessed, which is intended for human consumption and includes primary food to the extent defined in clause (zk), genetically modified or engineered food or food containing such ingredients, infant food, packaged drinking water, alcoholic drink, chewing gum and any substance, including water used into the food during its manufacture, preparation or treatment but does not include any animal feed, live animals unless they are prepared or processed for placing on the market for human consumption, plants prior to harvesting, drugs and medical products, cosmetics, narcotics or psychotropic substances.”

The manufacturers are only producing such combinations in food supplements and neutraceuticals to avoid the rigors of area, building, machinery, equipments, facilities under Schedule M, regular inspections under Drugs Act, mandatory approvals from concerned Licensing Authorities (Drugs) and above all that ceiling prices under Drugs Price Control Order.