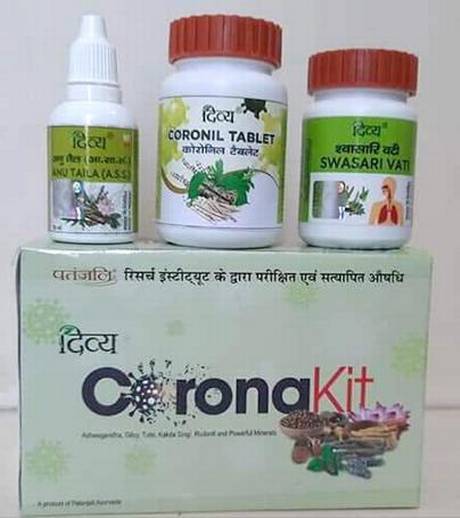 Gurugram : The Haryana’s AYUSH Department, which purchased ₹2.72 crore-worth of Ramdev’s Ayurvedic COVID-19 medicine ‘Coronil’ in May this year, is not in possession of any test reports to establish its efficacy, an RTI reply has revealed.

The department also does not have a record of those who have recovered from the use of the ‘medicine’.

The proposal for the purchase of Coronil was referred by the office of Chief Minister Manohar Lal as per a letter by Haryana Medical Services Corporation Limited, the RTI reply revealed.

Due to paucity of funds with the AYUSH Department, the drug was bought with funds from the Haryana Corona Relief Fund.

The set of documents shared by the department, in reply to the RTI application by Panipat-based activist P.P. Kapoor, revealed that the technical panel of the AYUSH Department met on May 18 and approved the purchase saying the composition and strength of Coronil was as per the recommendations for immunity boosting and “maybe finalised and it may also be suitable for Corona patients”.

It also recommended that approval of the CM be taken to procure Coronil under the relief fund by giving relaxation in Medicine Procurement Policy, 2016, and tendering process since the department did not have funds for procurement.

The State had 83,161 active cases on the said date and the panel approved to buy one lakh Coronil kits as mentioned in the quote given by Divya Pharmacy. Some of the ingredients of the tablet includes Giloy, Ashwagandha, Tulsi, Mulethi, Marich, and Choti Pipal.