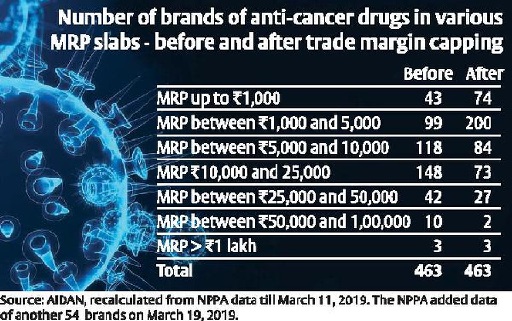 BENGALURU : The Karnataka High Court upheld the Union Government’s policy of capping the trade margin of 42 anti-cancer drugs at 30 per cent.“If such policy is not promulgated, the poor or middle class which forms the majority of the population could succumb to the disease due to high prices that manufacturers project, making them unaffordable. Therefore, the challenge to the government order by a retailer whose motive is profit, cannot be countenanced,” said Justice M Nagaprasanna, dismissing a petition filed by Healthcare Global Enterprises Limited.

Additional Solicitor-General of India contended that for the public good, essential drugs can be placed under the price control order as market forces are charging 900 per cent more than the manufacturing cost, and the cap is on all anti-cancer drugs. It was issued in the public interest and was to be in operation for one year, and later to be increased by 10 per cent. Therefore, no manufacturer can claim to impose a 900 per cent margin on a cancer drug which is needed by citizens suffering from the disease,” he argued.

While fixing the cap, the Department of Pharmaceuticals, under the Union Ministry of Chemicals and Fertilisers, directed manufacturers to fix their retail prices. In all, 42 drugs are listed. The petitioner moved court after the notification on February 27, 2019, contending that the petitioner being a stockist, the cap laid on the manufacturer would result in his business getting affected, inter alia. The court said the petitioner now seeks to contest it as the order will pull down his profit as he is only a retailer. The cap is on the manufacturer but the effect is on the retailer.