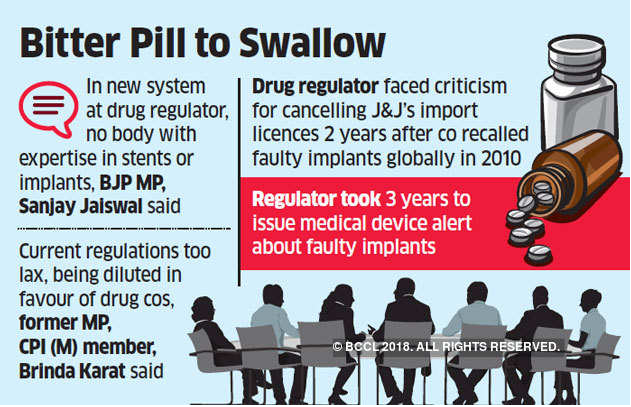 Mumbai | New Delhi: Two members of a parliamentary panel that recommended an overhaul of India’s Central Drugs Standard Control Organisation (CDSCO) six years ago have accused the regulator of failing to perform its duty to safeguard patients in the Johnson & Johnson hip replacement case.

“We wanted medical devices to be a separate department. They (the health ministry) agreed to our recommendation, but in the new system there is no body with expertise in stents or implants,” Sanjay Jaiswal, a BJP MP, told ET.

Jaiswal was part of the 2012 Parliamentary Standing Committee on Health and Welfare that for the first time laid down clear recommendations and criticisms of the functioning of the CDSCO. These included a change in the qualifications for the post of the Drug Controller General of India.

The CDSCO has come under fire for cancelling J&J’s import licences two years after the company recalled the faulty implants globally in 2010. The regulator took three years to issue a medical device alert to hospitals, surgeons and patients about the faulty implants.

It started to seek information on patients with the faulty hip replacements who were not yet identified and on implants that weren’t recalled from India only in 2014, according to the report of an expert committee constituted in 2017 to look into the issue.

“It is criminal negligence by the CDSCO. So many patients could have been treated faster if the drug controller hadn’t delayed in issuing the recall,” said Brinda Karat, a former MP and a member of the Communist Party of India (Marxist). Karat, who was part of the parliamentary panel, said the current regulations are too lax and are being diluted in favour of drug companies.

The panel had slammed CDSCO for giving primacy to the drugs industry for decades because of which, “unfortunately, the interest of the biggest stakeholder i.e. the consumer has never been ensured.” The two members were of the view that progress on the panel’s recommendations has been slow.

Johnson & Johnson case: Parliament panel members lash out at CDSCO
Jaiswal, who heads the BJP’s advisory group on health, advocated the need for a central drug, implant and device authority under a technocrat.

An official from the drug controller’s office who did not wish to be identified suggested that the regulator has little powers to act in such circumstances.

“The regulator took whatever action is permitted by the Drugs and Cosmetics Act and Rules,” the official said about its response to the issue of faulty implants. “As soon as it came to the notice of the regulator that the product is creating some adverse reactions, immediately parallel action was taken over the recall.”

Dinesh Thakur, the whistle blower who exposed data manipulation issues at Indian drug maker Ranbaxy in 2013, said he had written earlier to the government highlighting the “urgent” need to notify rules on the recall of drugs. Given that medical devices are classified as drugs as of now, the rules would have extended to even sub-standard medical devices, Thakur said. Yet, the government hasn’t notified these rules, even after having drafted a set of recall guidelines, he said.

“Somebody has goofed up somewhere. Our regulatory system has failed to live up to the expectations of the people,” said Balbir Punj, a former MP who was on the parliamentary committee. “There is a general lethargy in the system.”