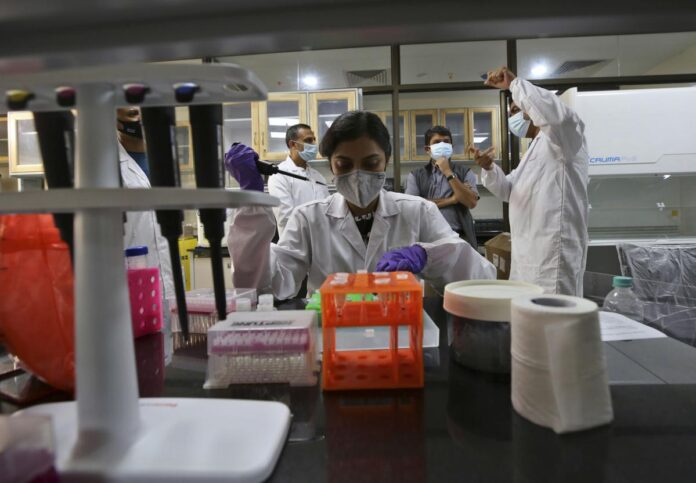 As the first wave of the pandemic began to take hold in India, Sanchi Jawa and her 59-year-old father, Harish Jawa, realized that they had the symptoms of a COVID-19 infection. They decided to isolate and get tested – but this was no easy task during the spring of 2020.

The father and daughter had to make multiple calls to several private labs in the capital of New Delhi before they could arrange for the gold standard in COVID-19 testing – a real-time reverse transcriptase-polymerase chain reaction test, or RT-PCR.

“It (RT-PCR tests) should be accessible to the common man, and everybody should be able to get it done,” Sanchi said.

Over a year later, most Indians can access PCR tests at a fraction of the cost – due to a large-scale public-private partnership, known as InDx, that set up the local know-how and infrastructure to manufacture these tests within India.

Soon after the pandemic broke out, India’s government, with funding from The Rockefeller Foundation, tasked the country’s most advanced bioscience innovation hub – the publicly funded Centre for Cellular and Molecular Platforms, or C-CAMP – with quickly finding a way to locally produce virus test kits.

But that was not a simple task as most components of the RT-PCR test – including the mixers required to analyze samples – were not manufactured in India and had to be imported from China and South Korea, driving the price up.

With global trade almost at a standstill, and huge demand for test kits from the U.S. and U.K., delivery was also extensively delayed.
Reagents, primers, and other chemical components – like amidites and deoxyribonucleotide triphosphates, which are essential for the chemical analysis used to detect the virus’ presence – had never been widely manufactured in the country and had to be imported. Even accessory parts, like plastic vials used in the testing process, were mostly imported.
Working with Indian manufacturers of medical technologies, along with support from Tata Consultancy Services, the C-CAMP-led program pushed through a rapid change.
India expanded from 14 laboratories capable of conducting COVID-19 tests in February 2020 to more than 1,500 over the next six months. The country now has nearly 3,000 such labs.
The price of RT-PCR tests has fallen to as little as $7 in some parts of the country, a near tenfold decrease from when they were first made available.
The availability of locally made testing components has allowed the government to procure test kits for as cheap as 50 cents per unit when buying in bulk from manufacturers. Indian authorities can now dole out free RT-PCR tests for those who can’t afford the fees, and set low price ceilings for paid RT-PCR tests at private labs.
Lalith Kishore, chief operating officer of COVID-19 Scale Up Program at C-CAMP, says the public-private partnership has helped more than 160 Indian companies to innovate, create mechanisms and collectively manufacture more than a million RT-PCR test kits per day.
“A lot of these companies have enabled the complete reversal in terms of our dependance on imports with regards to diagnostics,” Kishore said.
India’s ramping up of COVID-19 testing capacity has enabled the country to conduct more than 580 million tests to date.

More than a million tests are still being administered in the country daily, and 80% of the test kits used are now completely manufactured in India.

Manisha Bhinge, managing director of Programs and Health Initiative at The Rockefeller Foundation, which pumped $3.5 million into the initiative, said she believes the increase in availability of COVID-19 tests allowed the country to implement a robust testing program that helped public health experts devise more effective policies to handle the virus outbreak.

This was especially important during the deadly second wave of infections in the country that peaked in May 2021 with more than 400,000 cases being detected each day.

“The scope of the crisis would’ve been significantly more, if we did not have the testing capacity in place to guide public health officials to understand how the outbreak was rolling out,” Bhinge said.

She added that while the scale up in production of test kits and other components of diagnostics have aided India in battling the pandemic and enabled self-sufficiency in molecular diagnostics, it has also created a new market for countries looking to procure diagnostic technologies and test kits.

Middle and low income countries now have “more stability and security and access to affordable medical technologies,” she said.

Cheap, and sometimes free RT-PCR tests have allowed millions of Indians like Mohit Dabla, 23, a driver who earns $300 a month, a chance to access world class virus testing.

When he first got symptoms in September 2021, his employer asked him to get a RT-PCR test. He was in luck as a government dispensary around the corner from his home in New Delhi offered the test free of charge.