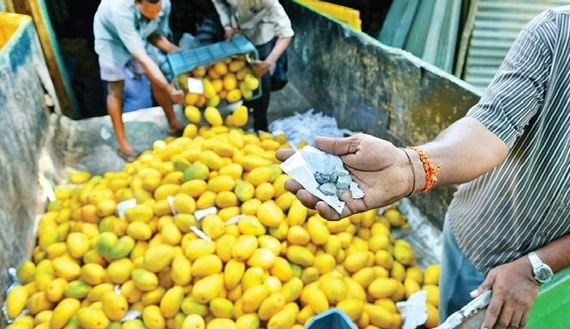 The Delhi based NGO Society Standing for all Youth Mass Awareness (SSAYMA) has filed Public Interest Litigation (PIL) No. W.P.(C) 3946/2016 before Delhi High Court for enforcement of prohibition on the use of Calcium Carbide for ripening mangoes and other fruits.
Mr. Sushant Mahapatra, Advocate, appearing for the NGO submitted before the court that Calcium Carbide is a prohibited item under Food Safety and Standard Act, 2006. The said chemical is prohibited in India since 1979. The said prohibition was introduced to the Prevention of Food Adulteration (PFA Rules) in 1979. As per the petition it is alleged that despite the statutory prohibition, Calcium Carbide is being use rampantly and openly in all major fruit markets of Delhi. Petition says that Calcium Carbide has traces of arsenic and phosphorus compounds and has a very harmful effect on the health of consumer of fruits ripened out of Calcium Carbide.

The fruits ripened out of Calcium Carbide may also have traces of arsenic and hence could be carcinogenic. Various studies relied upon by the petitioner says that use of Calcium Carbide in ripening mangoes seems to have created multiple health problems including diseases ofliver, kidney, heart and stomach.The petitioner relied upon various medical journals and health studies to support the cause of PIL.

The petition further alleged that the Food Authorities, Agricultural Produce Marketing Committee, Commissioner of Police etc. who have been imp-leaded in the petition, have failed to ensure compliance of prohibition under the Act.

In the Mango season the use of Calcium Carbide is rampant and we rarely found the Mangoes ripened without it. Eating such fruits like Mangoes are so harmful that over the long run, the carcinogenic effect of the residue creates multiple health problems.
The Petition filed by SSAYMA, the NGO, through Advocate Mr. Sushant Mahapatra has suggested eight ways to eradicate the use of Calcium Carbide which was appreciated by the Court. The bench of Hon’ble Chief Justice Mrs. G. Rohini and Mr. Justice JayantNath, issued notices and asked the Central Government, FSSAI, Delhi Food Commissioner, Delhi Govt, Police and Agricultural Producers Marketing Committee (APMC) to look into the suggestions given by the NGO in its petition like installing check gates etc. in the Mandi area.

The efforts were made by the Medicare News to reach for comments from FSSAI and Delhi Police but all efforts were went futile.

The NGO SSAYMA representative Mr. Vinay Verma said that he personally have surveyed the market and also took the help of other investigators to find out the extend to use of Calcium Carbide and surprising thing is that all people are aware of the ban on Calcium Carbide but knowingly using the chemical openly and to the knowledge of authorities. The increasing cancer cases and Kidney failure problems are also attributed to Calcium Carbide.

Carbide ripen fruit can be easily recognised. While the Papaya or Mangoes are yellow in color, the stem will be dark green. The green patches can also be seen. The ununiformed ripening of fruit is also another test. When dropped in bucket of water the Carbide ripenedmangoes will float.

The food safety authority of India must ensure that use of carbide must be stopped and provision of prohibition under rule 2.3.4 of regulation does not remain only on the statute book. It is also of the responsibility of state FDA commissioners to ensure that use of calcium carbide in fruits must be put ot the end and if necessary, special drive must be carried out by the food department in their respective states throughout the country during mango harvesting season as the use of calcium carbide increases rapidly for ripening of mangoes. Immediate measures are also required in case of all season fruits like banana and papaya for which long term action plan is also necessary. The next date of hearing is set to take place on 10.08.2016.