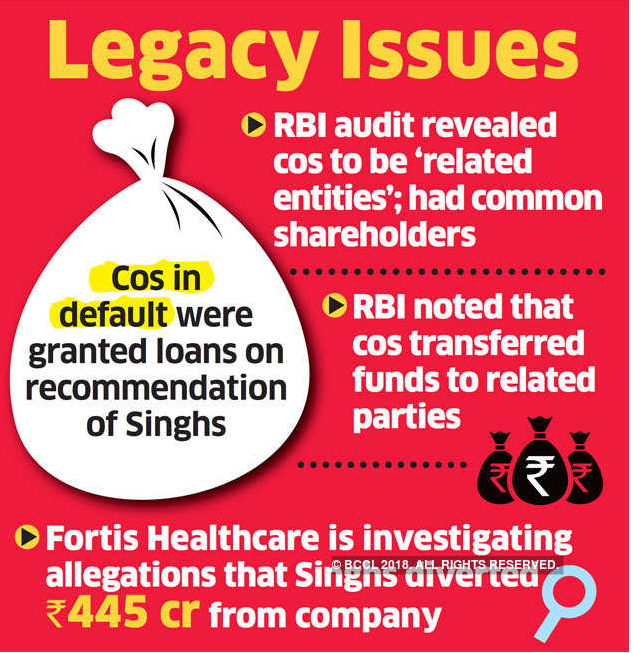 The claims have been filed at a time when Fortis, a hospital chain previously controlled by the Singhs, is investigating allegations of fund diversion.

The 19 firms were granted loans on the basis that they were parties ‘known to the promoters’, according to internal company correspondence and an audit conducted by external auditor TR Chadha on behalf of private equity investor Siguler Guff. ET has reviewed a copy of the audit.

The list of defaulters named by Religare includes two companies under scanner for diverting funds from Fortis through intercorporate deposits.

The Reserve Bank of India (RBI) had also raised red flags over loans to the same set of firms in a communication to Religare dated January 27, 2017, saying the firms were ‘related entities’ that had common shareholders and were frequently found to transact with each other.

The banking regulator also inspected bank accounts of the borrowers and, in nine instances, detected transfers of funds to related parties of Religare such as Ranchem, ANR Securities and Religare Comtrade.
Religare Finvest claims Rs 1,900 crore from 19 companies ‘known to’ Malvinder and Shivinder Singh
The New York-headquartered Siguler Guff is battling Religare to redeem an investment it made in its NBFC arm in 2011 through Resurgence PE Investments. It has also alleged in filings to the Delhi High Court that the Singhs diverted Rs 1,800 crore from the financial firm to related parties.

“We assumed management of the Resurgence portfolio in 2015, with the goal of achieving the optimum outcome for its investors,” a Siguler Guff spokesperson said.

“We are vigorously asserting the rights of our clients, consistent with our fiduciary duty. Our court filings speak for themselves,” the person told ET.

A Religare spokesperson denied comment, saying ET’s queries “concern matters that are either sub judice or protected by confidentiality obligations including privileged communication with regulatory authorities”.

A spokesman for RHC Holdings, the Singh brothers’ holding company, said the promoters were not a part of the process of granting these loans nor were they aware of the purpose for which they were granted. They were neither on the board nor managing the company, he said.

“Malvinder Singh and Shivinder Singh had to come back on to the Religare Enterprises board in mid-2016 when the issues of serious mismanagement by the past management of Religare, led by Sunil Godhwani started coming to light,” the person said. “As such, it is plausible that Religare Finvest may have taken the decision to grant the said loans on the assurances of prior Religare management that the entities were ‘known to the promoters,’” he said.

The spokesperson also said many loans that formed part of the corporate loan book of Religare Finvest were repayments of loans given by RHC and RHC Group and that the source of these repayments were not known to them.

Religare Finvest has filed claims for recovery of Rs 300 crore from Fern Healthcare (formerly Ranbaxy Animal Healthcare) and Modland Wears that were recipients of funds allegedly diverted through inter-corporate deposits (ICDs) from Fortis by the Singh brothers, ET first reported on June 13.

Fortis is also in the process of initiating recovery proceedings against the two firms after it wrote off Rs 445 crore as bad debts to these companies in its audited financials released on Saturday.

Some of the other parties against whom Religare Finvest has filed claims include Tripoli Investment and Trading Co, Volga Management Consultants, Torus Buildcon, Rosestar Marketing an AD Advertising.

ET’s research found that some of the firms had common directors or auditors, and were registered to the same address. They were also linked through crossholdings between firms that are now believed to be a part of the promoter group.

The Singhs had remained directors in some of the firms and had disclosed Fern Healthcare and Modland Wears to be ‘group companies’ in a draft red herring prospectus filed with market regulator Sebi for the initial public offering (IPO) of diagnostics chain SRL in 2011.

Religare has been under RBI’s scrutiny since 2016, when an inspection found irregularities in loans granted to a set of corporate borrowers.

The company’s auditors Price Waterhouse issued a qualified opinion on its financials for the year to March 2017.

“RBI has raised concerns around creditworthiness of some borrowers, credit appraisal and loan sanctioning mechanism followed by RFL (Religare Finvest),” Price Waterhouse said, quoting the January 27 communication from the banking regulator. “The letter also stated that accounts of these borrowers have been used to route funds to other group entities,” it said.

Fortis Healthcare had in its Saturday filings to the stock exchanges said the Singhs may have taken loans from Fortis to repay a part of the funds diverted from the hospital chain. It also stated that in light of ongoing investigations by regulatory authorities into the transactions, its board “at this juncture it was unable to determine whether a fraud has occurred”.

Serious Frauds Investigation Office (SFIO) is pursuing the charges against the Singhs and has sought more information from the hospital chain, it confirmed in the filing.

Religare, in a statement accompanying its financials for the previous fiscal, disclosed that RBI had instructed it to appoint a law firm to conduct due diligence on its loan book. The financial services firm has also been placed on a corrective action plan by the regulator and has been repeatedly instructed to reduce its corporate loan book to nil.