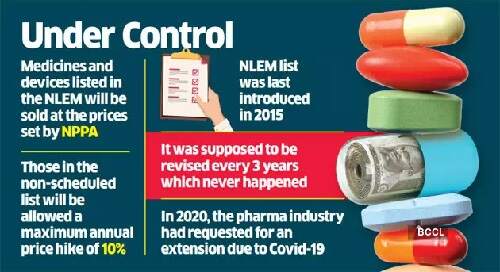 Medicines and devices listed in the NLEM must be sold at the prices set by National Pharmaceuticals Pricing Authority (NPPA), while those in the non scheduled list are allowed a maximum annual price increase of 10%. The revision of the NLEM aims to ensure that antibiotics are available when needed, and that the right antibiotics are prescribed for the right infections.

The NLEM list was last introduced in 2015. It was supposed to be revised every three years which never happened. In 2020 the pharma industry requested for an extension due to Covid-19. Last year, the Indian Council of Medical Research (ICMR) submitted a revised NLEM list to the health minister in September.

“However, the health ministry re-initiated the exercise of reviewing the drugs which has now been finalised,” said the same person. Commonly used drugs which are proposed last year to be brought under price control include anti-diabetes drugs such as teneligliptin and insulin glargine, anti-tuberculosis drugs bedaquiline and delamanid, antiparasitic ivermectin and rotavirus vaccine. The revised list has been formulated with a new method, a departure from the existing practice.

The committee on the National List of Essential Medicines (NLEM) headed by Balram Bhargava, former secretary, department of health research and director-general of the Indian Council of Medical Research decided on those medicines that should be available in adequate numbers and assured quality. For the medicines included in NLEM, manufacturers are required to sell their product equal to or lower than the ceiling price fixed using a formula set by the government.

A ceiling price calculation is based on the simple averaging of the market prices of different brands of medicines having a market share of at least 1 per cent.

The revised list has been formulated with a new method, a departure from the existing practice, where not all essential drugs will find their prices capped. The Standing National Committee on Medicines, was tasked with preparing the shortlist which medicines should be available in adequate numbers and assured quantity.

Under the earlier mechanism, the health ministry prepared a list of drugs eligible for price regulation, following which the department of pharmaceuticals under the ministry of chemicals and fertilisers incorporated them into Schedule 1 of the Drug Price Control Order. The National Pharmaceutical Pricing Authority then fixed the prices of drugs.