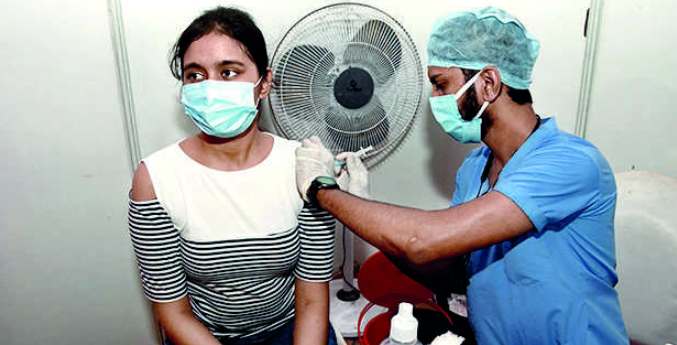 New Delhi: A little more than 25 per cent of healthcare workers were infected with coronavirus despite getting fully jabbed, a recent study has revealed, giving an insight on the breakthrough infections due to the Delta variant.

The study, jointly conducted by the Institute of Genomics and Integrative Biology (IGIB) and Max hospitals in Delhi-NCR, found that vaccination breakthroughs were far more common during the Delta-outbreak in Delhi than previously reported.

However, the severity of the infection was low and vaccination is crucial to avoid severe illnesses, said Shantanu Sengupta, senior scientist with the IGIB and one of the lead researchers of the study.

He also cautioned that of the 25 per cent who were infected, a large number were asymptomatic, so masking is also very important to arrest the spread of infection.

Sengupta said nearly 95 healthcare workers who had taken the two doses were studied. They were assessed from 45-90 days after their inoculation. Of the 95, more than 25 per cent saw breakthrough infections.

“Immunisation is expected to confer protection against infection and severe disease for vaccines, while reducing risks to non-immunised population by inhibiting transmission. Here, based on serial serological studies, we show that during a severe SARS-CoV2 Delta-variant outbreak in Delhi, 25.3 per cent of previously uninfected, ChAdOx1-nCoV19 (Covishield) double vaccinated, healthcare-workers (HCW) were infected within a period of less than two months, based on serology,” the study said.

Most infections were unrecognised. PTI