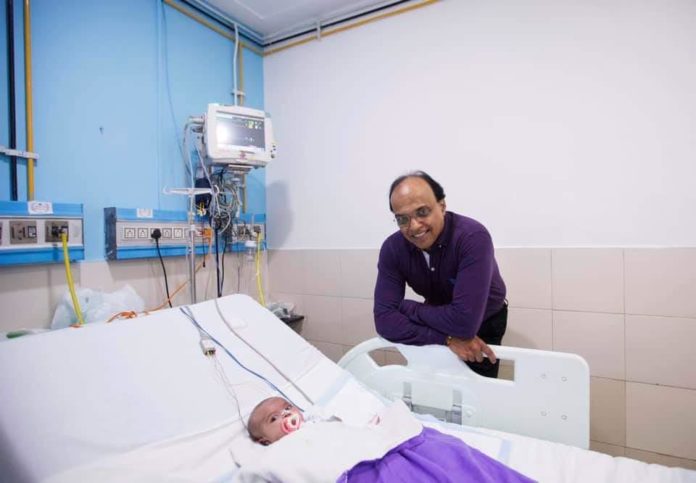 New Delhi: Doctors at Indraprastha Apollo Hospitals saved the life of a three weeks old baby girl Inaya from a rare heart condition known as Anomalous left coronary artery from the pulmonary artery (ALCAPA). When she was brought to hospital she suffered a heart attack. The surgery was to correct her medical condition was done next day on 13th May 2019.

A resident of Bulandshahr, Inaya presented with complaints of respiratory distress with excessive sweating and fast breathing with difficulty. When her parents brought her to the emergency department of Apollo Hospitals, New Delhi the child was found suffering from a heart attack, which means, her heart stopped beating.

Dr Muthu Jothi, Senior Consultant, Pediatric Cardiothoracic Surgeon, Indraprastha Apollo Hospitals said, ‘The real miracle happened in the emergency room when the team of doctors treating Inaya managed to resuscitate the baby by massaging her heart. Intensive care doctors were called and together they got the heart beating again within 40 minutes. After that the child was stabilized with medicine to support her heart functions. Despite being without any cardiac function for 30-40 minutes, the child did not suffer from any perceptible brain damage. The functioning of all her vital organs was assessed and they were all working within optimal ranges.’

Explaining about the disease which was afflicting the baby, Dr Muthu said, ‘ALCAPA is a congenital heart condition in which the left coronary artery that supplies blood to the cardiac muscles, originates from the pulmonary artery instead of the aorta. Due to this, left side of the cardiac muscles was deprived of oxygenated blood and was receiving deoxygenated blood. In adults, this condition wouldn’t be unlike a heart attack. These vessels are the ones which get blocked when a person has coronary artery disease which eventually leads to heart attack in older people.’

Without receiving to flow from left atrium (upper chamber) to the left ventricle (lower chamber), started to leak. This led to mitral regurgitation, that is, the blood went back to the lungs every time the left ventricle contracted. Children who suffer from this condition have low cardiac output, have breathing difficulty, chest congestion, and are not able to pass urine. Inaya’s blood flow was severely limited because of which she was very cold and clammy.”

The child was on ventilator and Dr Muthu Jothi quoted a risk of 50-70% to the parents of the child, who accepted the risk and consented to the surgery. The surgery was done next day on 13th May 2019.

Talking about the complexity of the surgery, Dr Jothi further said, “We took out the blood vessel from the pulmonary artery and then trans-located it into the aorta. The gap which was left behind in the pulmonary artery because of this was filled with the cardiac covering called the pericardium. The cardiac muscles started to receive oxygenated blood from the aorta. Post the surgery; since there was a lot of swelling of the heart, we left the chest bone open. We gauged overnight that the child’s urine output was very good and so, next day, I closed her chest bone. The child was on ventilator for another 2-3 days, and another ten to twelve days later the child was ready for discharge.”

Elucidating on the significance of the case, Dr Jothi said, “The case was complicated by the fact that the child had suffered a heart attack which lasted 40 minutes, post which she was resuscitated and then stabilised. However, by God’s grace and the skills of the emergency team at Apollo, the child was saved. Presently, she is on regular follow-ups.”

The parents of the child expressed their gratitude to the doctors at Apollo, said, “Watching our child’s health deteriorate everyday was painful for us. We accepted the high risk doctors presented, knowing that it was the only chance to save our little girl. Dr Muthu Jothi and his team supported and guided us on every step. We cannot thank the experts at Apollo Hospitals enough for giving a new lease of life to our child Inaya.”