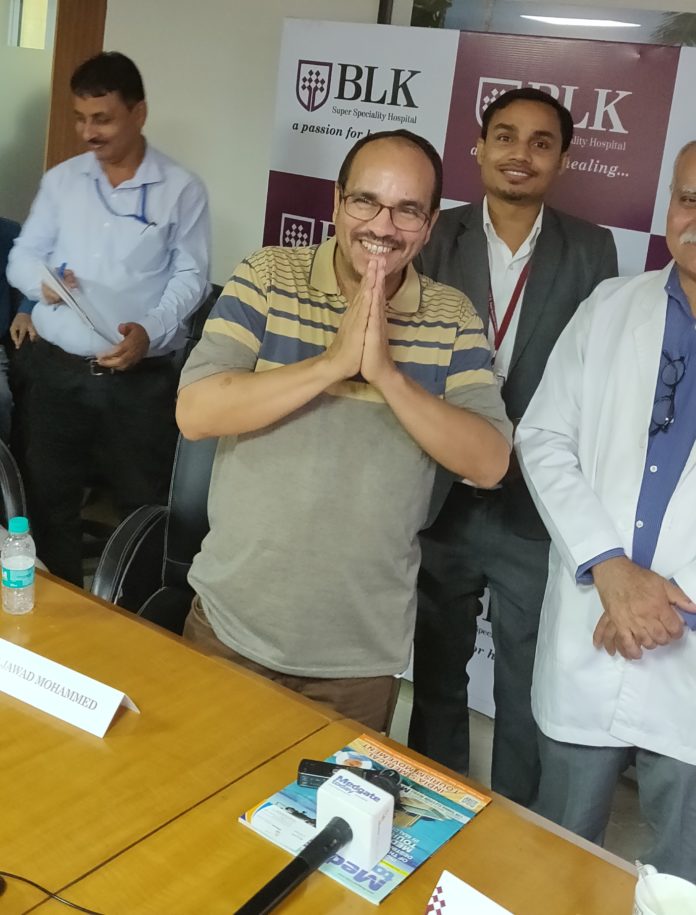 New Delhi: The script sounds straight from a Hollywood thriller. Iraqi patient Hani Jawad Mohammed who had an artificial heart transplant in BLK, turned out a bundle of drama. His recovery from heart failure is as gripping as events in his life are breathtaking.

BLK, Super Speciality Hospital in Delhi, never had it so thrilling! Thrill of being Asia’s first to decommission artificial heart and also of having such a phenomenal patient, a veritable stuff of folklore.

But when Jawad was presented to reporters on July 10, 2019 in the hospital, he appeared quite calm and composed and did not betray even a trace of what events he confronted in life so far.

Of late, while convalescing in the hospital Hani Jawad Mohammed, 52 year old wealthy businessman of Iraq survived shattering circumstances. His heart which had once failed sustained many a jolt. His son was made captive by ISI terrorists not long ago and he had to pay 1 million dollars as ransom to get him freed. It was certainly not a conducive event for his medical condition. His newly revived heart must have skipped some beats.

His heart once also escaped by a hair’s breadth when he was sprayed with gun shots in his country. Half a dozen bullets are still lodged in his body. One bullet had pierced his chest just above where his heart is. And lo and behold! His heart lastly came out a winner when it sprang to life after it failed one and a half year ago, thanks to artificial heart implanted in BLK and one year monitoring and medication by the hospital.

Jawad Mohammed can be compared with Dick Cheney, former vice president of United States and instrumental in US invasion of Iraq. When Dick Cheney was in Jawad’s country in the midst of war, he was wearing artificial heart like Jawad. Later on, Cheney had heart transplant.

Last but not the least, there is a very romantic aspect too to this extraordinary patient. The handsome and suave Jawad has three wives. And his third wife conceived in a hotel near BLK hospital a year ago while he was in the middle treatment!

Talking to Medicare News, Dr Ajay Kaul, Chairman and Head of CTVS, BLK Heart Centre, said, ‘we were really thrilled to see Jawad recovering so well. We are talking about this to heart surgeons all over the world and getting glowing response. We are going to send the case to some globally acclaimed medical journal for publication. It has no parallel in Asia’ Dr Sanjiv Popli, Principal Consultant, Cardiac Anaesthesiology, whose role was very important in the whole procedure said, ‘Decommissioning of artificial heart is very uncommon in the world. In Asia, it is the first decommission of artificial heart. Generally, the machine is left in the body even after the sedate and failed heart revives.’ Dr Kaul added, ‘ We did not want to withdraw the artificial machine but Jawad was insistent that he would no more carry it anymore as his own heart was working and we decided to take risk. We are very happy that we came out successful and BLK made a history. It was a very high risk surgery’

Jawad is a thriving tycoon and money was not an issue. The artificial heart cost about Rs 50 lakh and his total expense amounted to one crore of rupees. If cost would not have been such a bomb, millions of people suffering from heart failure would have got a new lease of life like Jawad did. Heart Transplant is also an option but a very difficult one. Jawad was also given an option of heart transplant but because of acute shortage donor’s heart and Jawad’s serious condition, artificial heart transplant was the only alternative. Dr Kaul said, ‘Heart Transplant is a very difficult proposition. Every month we get 20 cases for heart transplant but could hardly do one or two.’

Post implantation, Jawad was on constant and consistent follow up with Dr Kaul and his team in order to maintain Jawad’s parameters. One year of continuous monitoring and medications helped recuperate the ailing original heart. A year after he came back to BLK for follow up and after thorough investigations, doctors found the original heart restarted functioning properly even beyond their expectations. Hence, on Jawad’s insistence, they weaned off the artificial heart and Jawad’s own natural heart started beating again normally without any support.

Jawad had visited BLK in a very critical condition – with failing heart and rapidly deteriorating health.