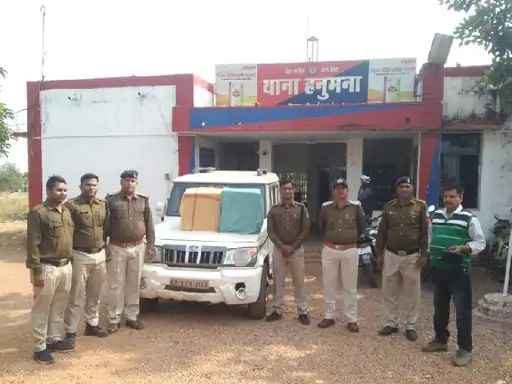 Rewa : As part of the campaign against drug peddlers across the state, the Rewa police got a big success in the early hours of Thursday. If sources are to be believed, while entering the MP border, the Hanumana police caught the Bolero under siege. In the search of the vehicle, 800 Bottles of intoxicant cough Syrup worth Rs 1.20 lakh have been found. Along with this, four smugglers have been arrested by the police.

The smugglers accepted to bring Corex consignment in Bolero from Mirzapur district of Uttar Pradesh. Three smugglers are Devra of Shahpur police station area and the fourth fellow is a resident of Ghurehta of Mauganj. At present, the Hanumana police have made the boleros stand in the police station after registering a case under the NDPS Act. All the four accused have been produced in the court.

Hanumana police station in-charge sub-inspector Shail Yadav said that on the morning of November 17, the informer gave the information. Claimed that Corex is coming from Mirzapur after being loaded in Bolero number MP 17 CB 2112. If not caught in time, Bolero Hanumana will cross the border. After verifying the information, senior officials were informed about the whole matter.

Immediately a team was formed and soldiers were deployed at the border. As soon as the concerned Bolero arrived. Which was stopped after overtaking. Some sacks found in the search of the vehicle. Inside which there were many cartoons. Smugglers refused to come when asked for documents related to transportation of suspicious goods. In such a situation, when the sacks were opened, 800 bottles of intoxicating cough syrup were found.

In another operation in west Bengal, acting on a tip-off, a special police team led by SHO Gaurav Hada of Madarihat police station in Alipurduar district (West Bengal)intercepted a courier service vehicle in Islamabad area of ​​the region on Wednesday night. During the search of which, a large scale banned intoxicant cough syrup was recovered from the vehicle. The police have also arrested a person named Rajesh Rai on the spot. 1872 bottles of banned cough syrup have been recovered from him.