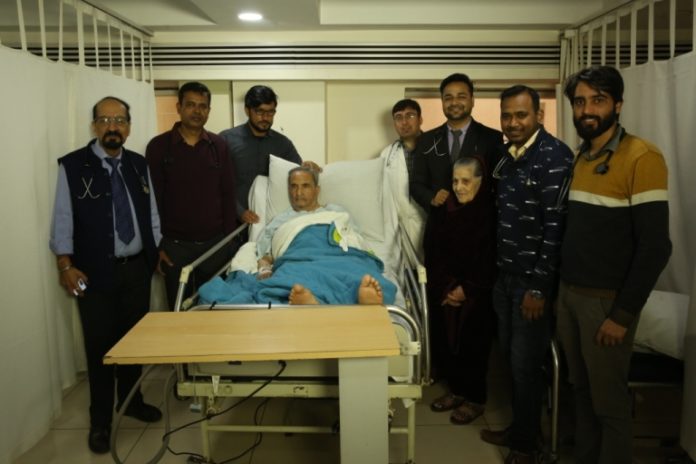 New Delhi: It was most apt when Dr P.N.Renjen, senior neurologist, Apollo remarked ‘Time is brain’. Time was of essence in saving 84 year old Mohd Taher Pandya from massive stroke. Quick recognition of the symptoms and timely action by the expert doctor rescued the old man.

Doctors said it was a unique case. Paynda suffered from a massive stroke but was saved due to quick recognition of the symptoms and timely action by the expert doctors at Indraprastha Apollo Hospitals. The patient, who was already suffering from bladder cancer, arrived at the Emergency Room (ER) with a sudden onset of weakness on left side of his body along with severe slurring of speech. The doctors immediately recognised the symptoms and activated the stroke code ‘CODE FAST’ which signals all the components of the neurology team to get active.

Commenting on the condition of the patient, Dr. Renjen said, “The patient was brought to the hospital in a critical condition where in the limbs on the left side of his body were completely motionless and he also had severe difficulty speaking. Apollo Hospital as a part of routine practice has a system to announce Code Fast if any patient shows symptoms of acute stroke. This process is incredibly helpful in speeding the work-up of the patient. MRI of his brain with MR angiography was done on urgent basis, which informed us that the major first part of Middle Cerebral Artery (MCA)of his brain was completely blocked. This artery is a branch of internal carotid artery and is a major source of blood for the brain.”

Dr. Renjen discussed the patient’s case and medical history with Dr. Harsh Rastogi, Senior Consultant, Neuro-interventional radiologist at Indraprastha Apollo Hospital, and it was decided that the best course of action would be to perform Mechanical Thrombectomy, a novel life-saving treatment for stroke which is used to remove large clots which cause blocked blood vessels.

Dr. Rastogi said, “Mechanical Thrombectomy is a type of minimally-invasive surgery in which specialised equipment is used to remove clot from the patient’s artery. The interventional radiologist starts the procedure by making a small incision in either the wrist or the thigh, allowing them to access to an artery post which a catheter is inserted through the artery to reach the blood clot. Next, a tiny net-like device called a stent retriever is inserted into the catheter and is further guided to the blockage. The stent retriever is then pushed right through the clot, which is a tricky part. After the stent retriever is through, it expands to the size of the artery wall. At this point, the stent retriever has captured the clot, and the doctor is able to pull the whole thing backwards, removing the clot entirely.”

“After thorough evaluation of the patient’s condition, we counselled the family about the procedure in detail. After the family agreed to the suggested course of treatment, the patient as rushed for Digital Subtraction Angiography (DSA) lab where we discovered the extent of obstruction and decided to remove the clot with the use of Solitaire Thrombectomy device. Within a span of few minutes, the blood flow was re-established in the same arterial territory without any complication,” Dr. Renjen explained highlighting the success of the procedure, “Post treatment, Taher showed remarkable neurological improvement and within a span of few hours of the procedure, he was able to lift his left upper and lower limb against the gravity. He was kept under observation in ICU for next few days and was then shifted to a ward for another couple of days for post-op observation. He was discharged after seven days with almost complete recovery, with the left side of his limbs working and speech functioning normally.”

Taher, expressing his gratitude, said, “There are no words to explain how thankful I am to Dr. P N Renjen and the team of specialists at Indraprastha Apollo Hospitals, who worked dedicatedly and tirelessly to save my life. They never gave up hope and kept me motivated throughout the ordeal.”

The Stroke Services of Institute of Neurosciences at Indraprastha Apollo Hospitals is considered one the best institutes for neurology treatment as it offers advanced services in the form of a dedicated stroke protocol which involves a stroke code 0- CODE FAST, high end MRI and CT services with a dedicated DSA intervention lab. The hospital also runs the stroke clinic and Apollo stroke support group. These services are available 24/7 and a dedicated team looks after a stroke patient to provide the best available care.