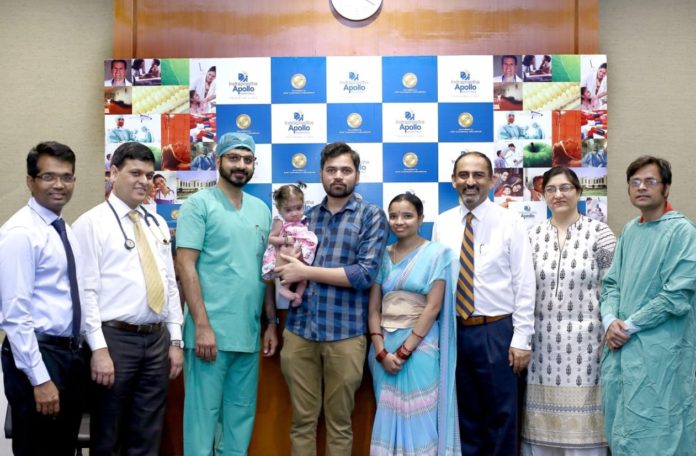 New Delhi: Two dire conditions seemed to have conspired against 5 year old baby weighing barely 4.5 kg but doctors at Apollo frustrated the design. Diagnosed with rare Budd Chiari syndrome in combination with Biliary Atresis, she needed an urgent life saving liver transplant which team of doctors flawlessly executed. The cost of this unusual liver transplant was funded by crowd.

Surampudi Sehitha from Kakinada, Andhra Pradesh, had come to the hospital in a precarious condition and a very high risk was involved in the procedure. It was at the informed decision of her parents that doctor performed the risky procedure. Her mother donated a portion of her liver for the transplant. Budd Chiari Syndrome is a rarest of rare disease affecting only 1 in 2 million children. The combination of Budd Chiari syndrome with Biliary Atresia is an extremely rare case. The baby developed jaundice when she was just one month old. Her condition worsened as her abdomen started distending due to progressive swelling. 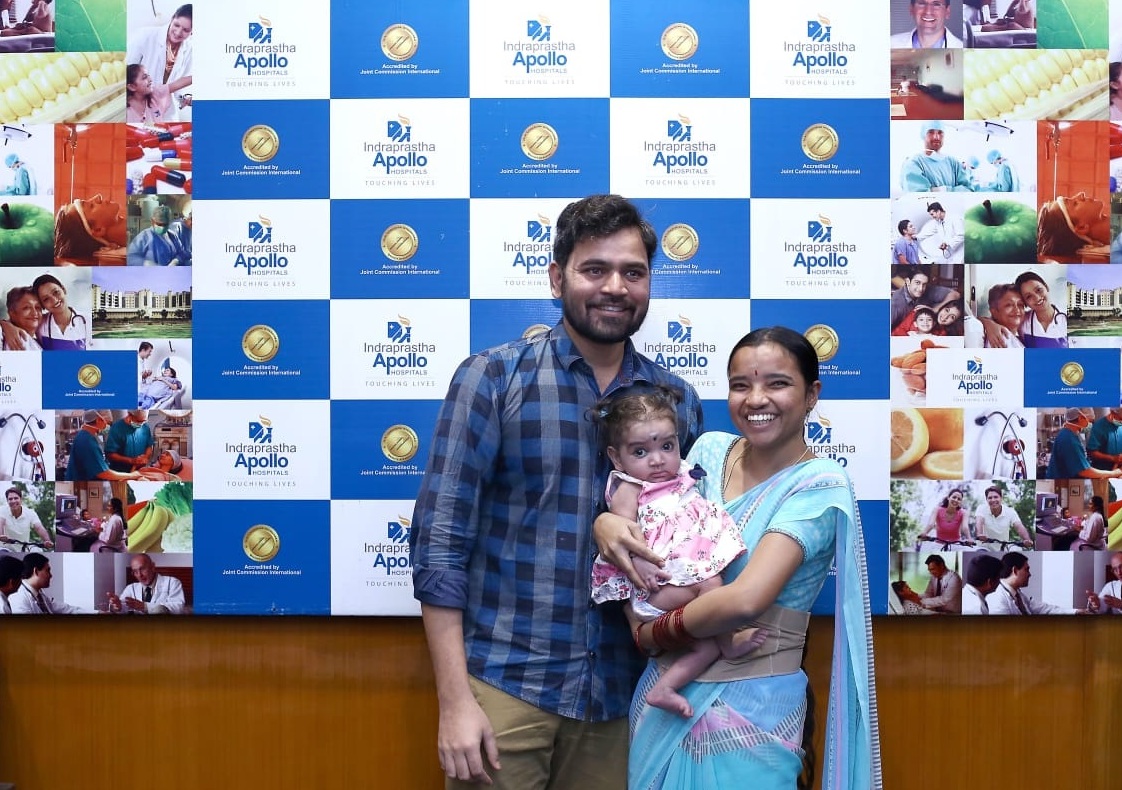 Dr Anupam Sibal, Group Medical Director and Senior Paediatric Gastroenterologist & Hepatologist, Apollo Hospitals Group, said, ‘In Biliary Atresia, which is seen 1 in 12000 babies there is no connection between the liver and the intestine. The first step in treatment is to create a connection between the liver and the intestine. This was attempted at the local hospital initially to treat the baby’s condition but as Surampudi’s liver was already severely shrunken (due to cirrhosis), the procedure was abandoned. She was referred to Apollo Hospital for a liver transplant.”

‘She weighed 5.5 kg when she first came to our hospital, including abdominal fluid of about 1 litre. So effectively, her weight was 4.5 kg. CT Angiography showed that she was suffering from occluded hepatic venous channels which drain the liver. The diagnosis of Budd Chiari Syndrome was made. It is a very rare disease which afflicts 1 in 2 million children. Budd Chiari Syndrome had resulted in rapid worsening of the baby’s condition which necessitated an urgent liver transplant. While Biliary Atresia is the most common condition for which liver transplants in children are performed, Budd Chiari syndrome is extremely rare. Of the 320 liver transplants that we have performed in children, more than 140 have been for children with Biliary Atresia. The combination of Budd Chiari syndrome with Biliary Atresia in a baby is the rarest of rare case’ Dr Sibal added.

Dr Neerav Goyal, Senior Consultant liver transplant and Hepatobiliary and Pancreatic surgeon, explained, ‘A combination of Budd Chiari and Biliary Atresia made the liver transplant very high risk. The blood vessels in a baby are very small (3-4 mm) and with Budd Chiari Syndrome the risk of clotting in the blood vessels is increased. We explained the procedure to the parents in detail and counselled them so that they make an informed decision. Initially, the father was worked up as the donor but his liver was found unsuitable for donation. The mother’s liver turned out to be compatible. After her surgery, Surampada, recovered well and was discharged after three weeks. Today she is on medications to prevent re-occlusion of her tiny vessels and to prevent rejection of the transplanted liver.’

‘As the family had limited resources, they received financial help from many benevolent people who came forward to contribute for her treatment through a crowd-funding platform’ he added.

The parents of the child said, “Having to watch our newly born in so much pain is one of the toughest burdens that we had to bear as parents. However, doctors at Apollo did not let our confidence shatter and worked dedicatedly to save the life of our baby girl. We are extremely thankful to the team of doctors at Apollo as well as the people who came forward to help us out financially through this tough time. Our baby is alive and well, thanks to the kindness of many strangers.’