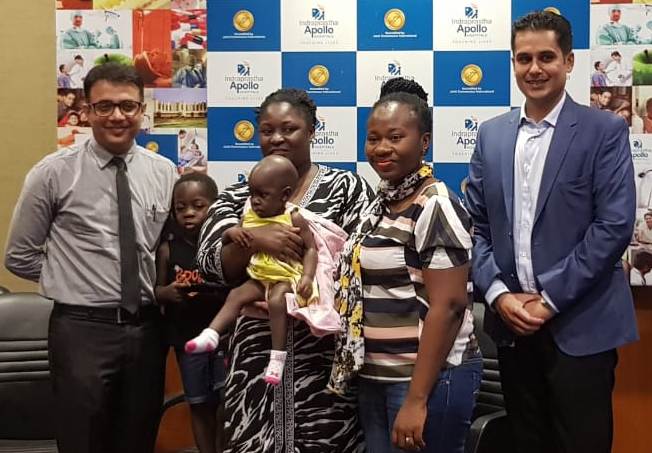 New Delhi: Kylie, 10 months old Ugandan girl, is now completely free from Sickle Cell sickness, thanks to Bone Marrow Transplant (BMT) in Apollo two months ago. The same is the case with her 3 year old brother Kaiser. After this, both will live a full and normal life. But Indians are yet to wake up to this cure from this debilitating disease of blood disorder.

The Super Speciality hospital today showcased these African kids for the occasion of upcoming World Sickle cell day (June19) to underline the availability of cure for this disease and utter lack of awareness in India about this disease and treatment. In last three years, over 100 BMT have been done in Apollo out of which there is only one Indian though the fact is India has the second highest burden of the disease.

BMT is the only cure for this disease. The management by medicines and life style changes helps but they hardly live until 40 years of age. For full life BMT is the only option. The increasing success rate of a particular bone marrow transplant, the only treatment for the disorder, has raised hopes for sickle-sick population in India.

Paleness, yellowish eyes, enlargement of spleen, swollen joints of hands and feet; episodes of intense pain in the chest, abdomen, joints or bones; and frequent infections are some of the leading symptoms of sickle cell anaemia. Because the disease causes the body to have a shortage of red blood cells, it is also characterized by chronic fatigue. In infants, children and teenagers, sickle cell anaemia can cause delayed growth and puberty. In India, it is most prevalent in South India, Chhattisgarh, Bihar, Maharashtra and neighboring areas of Madhya Pradesh.

Dr Gaurav Kharya, Clinical Lead, Centre for Bone Marrow Transplant and Cellular Therapy, Senior Consultant – Paediatric Haematology – Oncology & Immunology lamented utter lack of awareness about this disease. He said, ‘Sickle cell disease is an inherited blood disorder which is characterized by defective haemoglobin (HbS), with a typical S shape. Normal haemoglobin (HbA) is ‘O’ shaped. Haemoglobin is supposed to carry oxygen to different parts of the body. However due its defective shape, the red blood cells (RBCs) cluster together and are unable to move through the blood vessels easily. These clusters obstruct the small arteries and capillaries, thus stopping the movement of oxygenated blood which causes many complications. In comparison to normal RBCs which live for about 120 days, these defective cells live for 10-20 days maximum. Due to this, the number of haemoglobin cells in the body lessens significantly causing chronic anemia. Patients suffering from this tire easily, due to lack of enough oxygen in the blood.”

Speaking on the India-specific scenario, Dr Kharya further said, “According to latest reports, India has the second highest burden of the disease. This has been derived by India-specific model-based map of sickle-cell allele frequency which accounts for the district-level distribution of various populations. Though this disease has been around for long, it has largely been undocumented and is most common among people of African, Arabian and Indian origin. In our country, it is widespread among the ‘sickle cell belt’, that is, a significant population of the Deccan plateau of Central India, northern Kerala and Tamil Nadu. It is also prevalent in Chhattisgarh, Bihar, Maharashtra and neighboring areas of Madhya Pradesh.’

‘This is a genetic blood disorder, so in the newborns the symptoms start occurring when they are as young as five months old. These symptoms are related to the complications associated with the disease which cause yellowish color of the skin (jaundice) or the whites of the eye (icterus). Patients with sickle cell disease are also constantly fatigued and experience painful swelling of hands and feet. Children with sickle cell are also at risk of frequent infections. As they age, they experience delayed growth and other development problems related to vision, he added.

Talking about the prevention and care of the disease, Dr. Kharya added, knowing one’s status of sickle cell anemia is extremely important. Every eligible bachelor should know if they are carrying a gene for sickle cell anemia or not and if they are carrying the defective gene, they should take necessary precautions while choosing the partner or planning the pregnancy. Prenatal diagnosis in families with history of SCD is an important way of passing it to future generations.

When it comes to care of affected children regular immunizations, avoiding high altitudes and extreme temperatures, maintaining hydration and healthy life style are extremely important to prevent or minimize sickle cell related problems. Apart from this all such kids should be on regular medications such as hydroxyurea, penicillin, folic acid and antimalarial prophylaxis. In case of acute complications child should be taken to medical facility as soon as possible.

Talking about cure for SCD, Dr Kharya highlighted that Bone Marrow Transplant (BMT) is the only curative option for SCD so far. People are not even aware of BMT as a cure option for Sickle Cell treatment. Dr Kharya has done close to 100 BMT’s for SCD from various parts of the world with excellent success rates even for the most complicated transplants. His work has been greatly appreciated at various national and international forums.