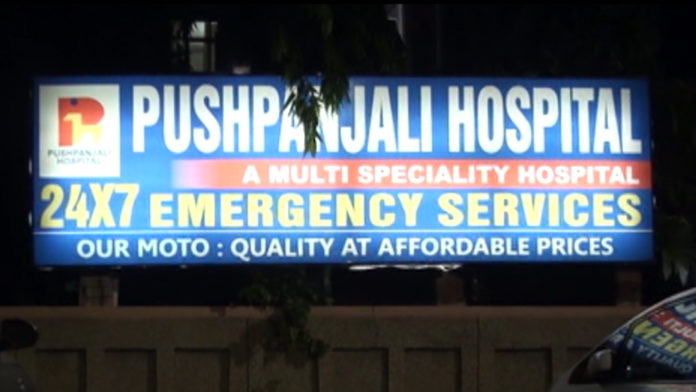 Gurugram / New Delhi: Pushpanjali, a multi speciality hospital in Gurugram, punctured the wrong kidney to eliminate stones in a woman patient, pushing her to the brink of death. Thankfully, Medanta hospital rescued the patient from the jaws of death.

Stones lay in right kidney but the doctor punctured the left kidney. And, then, made matter worse by doing the procedure on the right kidney simultaneously to remove stones in flagrant violation of the protocol. Profuse bleeding led to extreme pain and flatulence of her stomach.

In a complaint filed with City Police Commissioner, victim’s lawyer husband Ajay Kumar, Chairman, Jhajjar Central Cooperative Bank, has alleged that the hospital left her to die to hide its gross negligence and to avert bad name for the hospital. He has named Urologist Dr S.P. Yadav as the wrong doer, saying he had some ulterior motive. The patient Sheela Devi is now convalescing in Medanta hospital and is said to be out of danger.

In the complaint, Mr Kumar, a resident of Sector 4 in Rohtak extension area, has stated that he took his wife Sheela Devi to Dr S P Yadav, Urologist at Pushpanjali hospital in Gurugram on 27-5-2019 for the treatment of kidney stones. After X- ray and blood test, Dr Yadav told them to come other day. On 28-5-2019, Dr Yadav took the patient to operation theatre. Dr Yadav’s wife Suman Yadav also accompanied him. Ajay Kumar has detailed what happened to his wife in Pushpanjali.

Mr Kumar further states- after 2-3 hours, Dr Yadav brought back his wife from operation theatre. He saw her two sides of stomach bandaged and a bag full of blood hanging by her side. On asking, Dr Yadav said that he had made a mistake of making a small puncture in left kidney instead. After that, ‘I have removed stones from the right side kidney too.’

Then after about 3 hours, Dr Yadav shifted my wife from operation theatre to recovery room. When I went there, I saw bag still hanging and profuse bleeding continued. On being asked, Dr Yadav said he would mend his mistake. When my wife came to senses, she told us that Dr S.P.Yadav did not do the surgery; it was his wife who did the procedure. Dr Yadav was busy talking to someone on phone the while.

Dr Yadav sought time till morning saying he would mend his mistake. When I said I was taking my patient to other hospital, Dr Yadav pleaded not to do that because that would bring bad name to the hospital. He said other hospital would do the same thing that he would do here. In the evening, when my wife’s face went pale, I said to doctor perhaps she had become anaemic. Then the doctor did a test to find her blood group which he should have done in the beginning.

On 29-5-2019, at 12 o clock, Dr Yadav started telling me and my daughter Suchitra, bleeding is not stopping, so we are putting stent in the Kidney. I insisted again for her shifting to other hospital, Dr Yadav assured that everything will be right till night. We should have little patience. Dr yadav again took my wife to Operation theatre. After about 3 hours, he came out saying that he had put stent in the kidney and bleeding stopped.  She would be alright in 2-3 hours. When I pointed to her swollen stomach, Dr yadav said it was due to gas and then tubed his nose saying she would be alright after gas empties. Then he took my wife to ICU stopping us from going there. On 30-5-2019, at about 6 a.m, me and my daughter Suchitra entered ICU and saw her stomach was still bloated.

Sheela told us that at night all slept closing the door. I was writhing in pain but no one came to my rescue. She said she overheard staff talking that Dr Yadav had decided to let her die because the case has deteriorated. If the patient goes to other hospital, the hospital’s name will land in disrepute. They were saying that after making a mistake of puncturing left kidney, he should not have touched right kidney. Both kidneys are never operated together.

Hearing this from Sheela I called Dr S.P. Yadav saying shift her to Medanta immediately or we would take her away. Being forced by us, Dr Yadav called an ambulance and shifted her to Medanta. Medanta insisted for referral summary which Dr Yadav did.

In Medanta, it was found that her life was in extreme danger due to seeping of blood in the stomach, puncture of wrong kidney and infection in lungs. Talking to us, experienced medical officer and other staff at Medanta told us that such infection results due to non sterilization of instruments used. It also emerged that the procedure in Pushpanjali was done not by any skilled and experienced doctor but by some greenhorn and non technical person. No SOP (Standard Operating Procedure) was observed in Pushpanjali . When I asked the Superintendent of Pushpanjali about this, he said that he had not any such printed or written document. It is also to be noted that my wife Sheela Devi told us after operation that first injection to make her unconscious was given in her waist and that too by wife of Dr Yadav.

Ajay Kumar has forwarded his complaint also to: