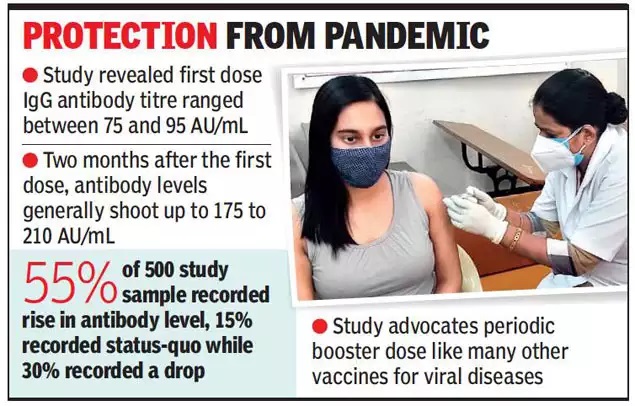 AHMEDABAD : Antibodies either acquired through Covid-19 infection, proximity to an infected family member or vaccination are key to thwarting morbid Covid-illnesses and are subject of intense study and deliberation in preparation for the third wave.

An exhaustive study carried out locally pointed at about 30% recipients, all health workers, recording reduced antibodies after three months.

Notably, 55% of the recipients recorded rise in antibody levels in blood. In another study, carried out by AMC-run hospitals – AMCMET, Maninagar, and NHL MMC, Ellisbridge indicated that the family members of primary Covid patients got higher seropositivity compared to other contacts and general population.

The study, based on the sero survey carried out in October last year, indicated that the family members had 28.8% seropositivity compared to 24.4% in other contacts. Overall seropositivity during the survey was found to be 26%. The findings are published in a recent edition of Journal of Health Science & Medical Research.

With regards to antibodies post-vaccination in healthcare workers, Dr Bhavini Shah, head (microbiology), Neuberg Diagnostics, told TOI that they had chosen 500 vaccinated doctors, nurses, paramedics and other members of medical fraternity, whose antibody titre (blood test to determine presence and level of antibodies) was collected.

“Later, samples were collected a month after both the doses, and the third sample two months after the second sample,” she said, adding that the sample had no prior record of Covid-19 infection.

Dr Bhavini Shah said that about 55% of recipients recorded a rise in antibody levels in blood. “These antibodies are IgG in nature and have neutralizing effect on the spike protein of coronavirus. The numbers rose significantly (75-100 to 150-200 AU/mL (arbitrary units per millilitre of blood) indicating vaccine efficacy to produce antibodies,” said Dr Shah. “In another 15% of samples, the levels did not change much between the first and second dose.”

But in 30% of the population, after three months, antibodies recorded a dip compared to their previous levels. “It indicates that protection against Covid reduces with time. From about 175-200, the levels were found to be around100-120 at the time of third sampling,” she said. “The impact is similar to flu vaccine that needs booster shots at regular intervals to maintain immunity.” Those who caught Covid during the second wave have a reason to cheer – the study’s results were compared with a database of 30,000-plus samples processed by the lab. The researchers found that those who got natural immunity after getting infected had much higher antibody count (up to 400 AU/ mL) and the impact lasted longer than the one acquired through immunization.

The researchers said that the diminishing impact of vaccination is common among most viral diseases. During the study, they found no definite group susceptible to the phenomenon. “We will be repeating the same exercise at nine months of the first vaccine to see the impact.” Hypothetically, how long will impact of vaccines last? Experts said it may take some more time to assess the actual numbers, but for most of the population, it may last for over six to twelve months.