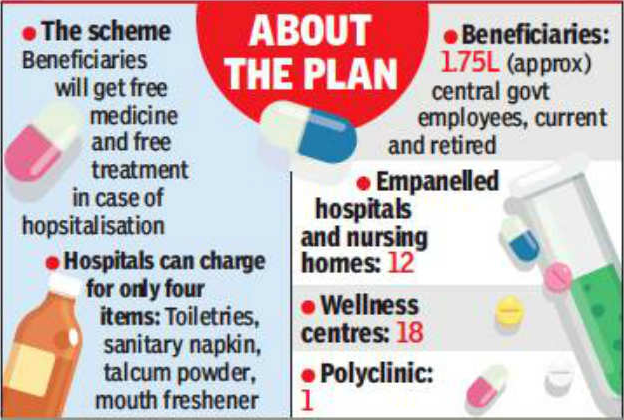 KOLKATA: More than 1.75 lakh beneficiaries of Central Government Health Scheme (CGHS), the health scheme meant for current and retired central government employees, have been facing trouble for the past six months owing to non-availability of medicines. Many patients alleged overcharging by empanelled nursing homes and hospitals.

“Many retired IAS and IPS officers are under this scheme. Even six months earlier, the system worked fine, but now, we neither get medicines nor proper facilities at hospitals. We have to buy everything from the market in spite of having paid to be part of the scheme,” an employee said. To be part of the scheme, current employees have to pay a portion of their basic salary and the amount should not be over Rs 200 a month. “After retirement, the employee has to make a one-time contribution of not less than Rs 60,000 and not more than Rs 1.25 lakh,” a retired employee said.

Khagendra Kumar Chakraborty, a retired Army staffer, ws admitted to a CGHS-e-mpanelled hospital on February 16 with cancer. On February 26. he died and his wife had to pay Rs 45,000 before the body was released. “But according to the MoU signed by the Centre and empanelled hospitals, the authorities can charge for only toiletries, sanitary napkins, talcum powder and mouth freshener. For these four, the bill could not have been this high,” a CGHS official said.

Hundreds of such complaints have been pouring into the CGHS Kolkata office every day. In June, Ardhendu Sekhar Dinda, a central government employee, alleged an empanelled hospital forced him to give a written undertaking that they could charge any amount against unapproved items. “I tried to approach the CGHS but to no avail,” he said.

TOI tried to get in touch with additional director A K Sikdar who looked after CGHS in Bengal but he refused to take calls. A copy of the MoU between hospitals and Centre that TOI has stated that the Centre, through its empanelled hospitals, would provide free treatment, medicines and free hospitalisation to its current and retired employees and that the hospitals could not charge for anything other than the four listed items.