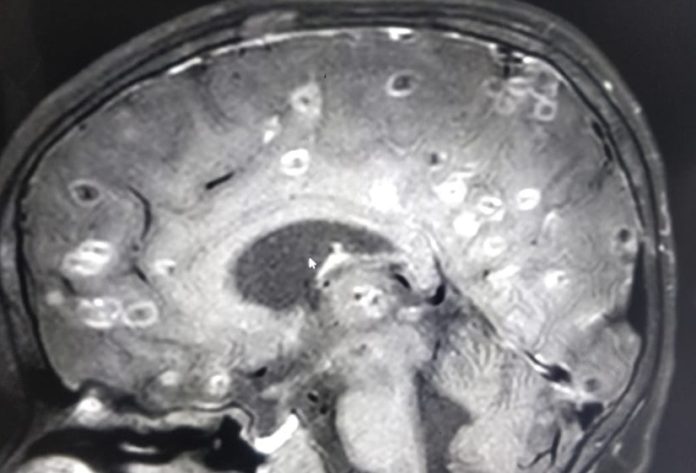 New Delhi: In a shocking discovery, doctors at Fortis Memorial Research Institute found 100 tapeworm eggs in the brain of an eight-year-old girl. The condition is called Neurocysticercosis. The condition is caused by accidentally eating foods infested by tapeworms.

The patient was presented with obesity, headaches, epileptic seizures, breathlessness, difficulty in walking and swelling of brain. Dr. Praveen Gupta, Director, Neurology at Fortis Memorial Research Institute and his team treated her for a period of six months using non-surgical techniques to remove the tapeworm eggs.

The patient had been on steroid treatment to tackle the epileptic attacks and headaches. As a result, she had gained weight and had gone from being 40 kilos to 60 kilos. However, the headaches persisted. The scan of the brain showed more than a hundred white dots, formed due to tapeworms. Such an infection is caused by accidentally eating foods infested by tapeworms. When eggs reach the brain through the nervous system, they cause neurocysticercosis. They had reached her brain (from her stomach) through her blood stream.

According to Dr. Gupta, “This was a very complicated case. The patient was unconscious at the time of admission. There were no surgical options available; and it was too risky to try anything experimental, considering her fragile condition. We first decided to reduce the swelling using decongestants and then we started anthelmintic therapy, which destroyed the parasitic worms. This was followed by course of steroids. She began to respond well to the treatment. Over a period of six months she recovered, free of any complications or side – effects. She is now 40 kilos, and is able to walk on her own and has gone back to school.

Neurocysticercosis is an infectious parasitic disease caused by solium, a tapeworm found in pigs. It occurs when cysts are formed within the brain causing neurological symptoms. It is caused when a person accidently eats improperly washed vegetables or fruits. It is also caused when uncooked meat is consumed. The symptoms result in the breakdown of the central nervous system or epileptic attacks. Immediate treatment in such cases is necessary.