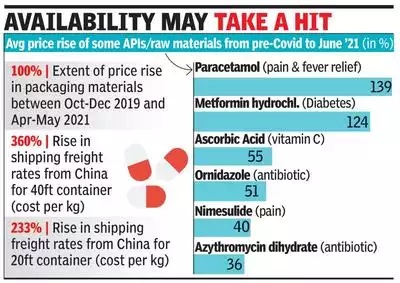 Mumbai : A steep rise in the cost of raw materials for essential drugs, called active pharmaceutical ingredients (API) in pharma circles, by up to 140% in certain cases since the pre-pandemic level, is pinching the industry hard. The overall increase, averaging nearly 50% in the wake of high-priced imports and supply disruptions from China, have raised doubts on the availability of drugs and could lead to shortages, particularly of those that are key in Covid therapy.

API prices of certain drugs like fever and pain relief drug paracetamol and life-saving antibiotic Meropenem (also used for Covid), and anti-diabetic metformin, have more than doubled to as high as 139%, 127% and 124% respectively, putting the spotlight back on India’s near total-dependence on the Dragon. Nearly 70% of the country’s APIs are imported from China, while the dependence is as high as 90% for certain life-saving antibiotics like cephalosporins, azithromycin and penicillin.

Since these medicines are under price control, companies are forced to absorb the higher cost, raising questions about their viability in future. In this scenario, over a period of time, certain medicines could disappear from retail shelves with companies switching to high-value products where margins are protected. In the wake of limited availability, patients may have to bear the brunt and be forced to shift to newer, steeply priced alternatives, industry experts say.

Dependence on China for key APIs has been an ongoing concern for the industry, affecting crucial raw materials for manufacturing cardio-vascular, diabetes, antibiotics, anti-allergics and vitamins. But since Covid, the price increase has been sharp. “API prices for some of our products have seen a sharp increase during the year,” a GSK Pharma executive told TOI. The executive added, “Since we have long-term contracts for paracetamol tablets, the percentage increase has been 75%, and for paracetamol suspension 115% (approximately) over the last year.”

Adding to the industry’s woes, packaging and freight costs have also jumped manifold (see graphic). “Industry has been facing a huge cost escalation due to imported raw materials and excipients — in some drugs as steep as 200%. There have also been massive increases in freight rates, transportation and packaging costs,” Indian Drug Manufacturers’ Association ED Ashok Madan said.

Reeling from this, the industry in March sought a one-time price revision of 20% in ceiling prices across the board, while recently it asked for specific molecules. It has also said that implementation of a revised National List of Essential Medicines be deferred till December to prevent rude shocks, if any.

Recently, the National Pharmaceutical Pricing Authority allowed a one-time 50% increase in prices in three key drugs — anti-epileptic carbamazepine, antacid ranitidine, and analgesic ibuprofen. Last year, blood thinner Heparin, widely used in Covid therapy, was allowed a similar increase.Significant disruptions caused by the pandemic spurred India’s decision last year to delink from China. With the objective of becoming Atma Nirbhar, the government announced a Rs 6,940-crore scheme for promoting indigenous production. “The government has said that they will help API companies with faster clearances under environmental laws by placing them in a more liberal category. That should help with improving manufacturing and reducing costs in the short term,” PwC India partner & pharma leader Sujay Shetty said.