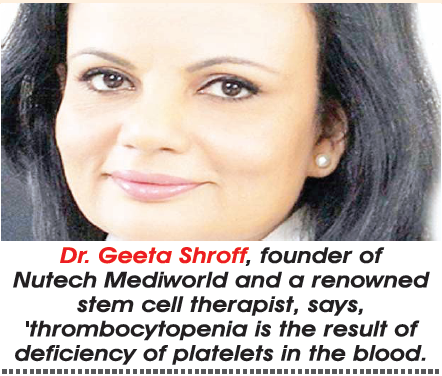 New Delhi: Blood clotting cell deficiency disorder known as thrombocytopenia can be successfully treated by human embryonic stem cell (hESC) therapy. Its efficacy has been well documented in prestigious international journal. Nutech Mediworld in Green Park is the sole facility for this. In severe cases, bruising and bleeding may be hard to control and can lead to life threatening mishap.
Dr. Geeta Shroff, founder of Nutech Mediworld and a renowned stem cell therapist, says, ‘thrombocytopenia is the result of deficiency of platelets in the blood. This causes bleeding into the tissues, bruising, and slow blood clotting after injury. Some people with this condition could experience prolonged bleeding from a cut, bleeding from the gums or nosebleeds, and women may experience an unusually heavy menstrual flow.
Treatment options  such as corticosteroids, immunog- lobulins medicines, blood or platelet transfusions, or splenectomy are used for thrombocytopenia patients.
But embryonic stem cell therapy has emerged as the most efficacious one. In a study published in International Archive of Medicines, Dr. Shroff has reported the safety and efficacy of human embryonic stem cell (hESC) therapy in two patients with thrombocytopenia. The patients were presented with general weakness. They were unable to do their routine work. After laboratory examinations, it was confirmed that both the patients were suffering from thrombocytopenia having platelet count 0.70m3 and 0.80m3, respectively.
hESCs used in the present  study were obtained from a single, spare, expendable, pre-implantation stage fertili- zed ovum taken during natural in vitro fertilization (IVF) and free from immunogenicity. After a single treatment session with hESCs, both patients showed an increase in blood platelet count and improvement in their condition. No adverse events (AEs) were reported.