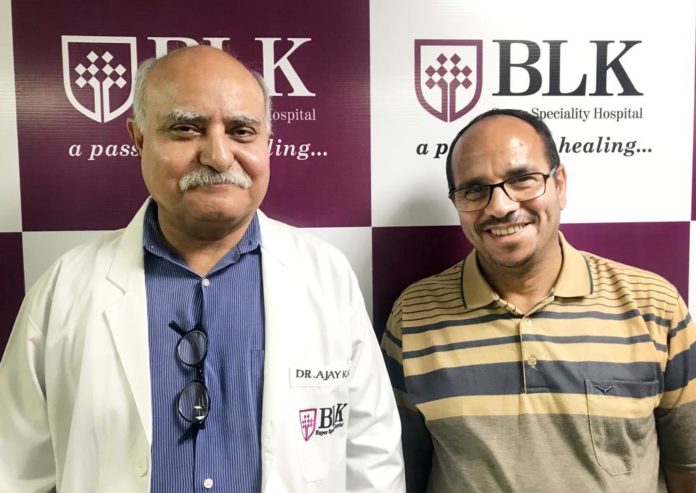 New Delhi: As if back from a year long holiday, the failed heart of a 54 year old Iraqi patient resumed pumping as a healthy heart would. The artificial heart that was in harness in between was sent packing.

This medical miracle happened in BLK, super speciality hospital, creating a history in Asia. Doctors’ hearts skipped beats seeing the sedate heart come to life again. Even in USA and Europe such decommissioning of artificial heart as this happens few and far between. In the words of Dr Ajay Kaul, Chairman and Head of CTVS, BLK heart centre, ‘Even I was not confident the patient will recover so well. I was taken aback to see his failed hear springing to life after we switched off the artificial heart.’

The life of the patient Hani Jawad Mohammed, an Iraqi businessman has been on a roller coastal in the last couple of years. As in case of failed heart, he had been ditching odds on a row. He was made captive by ISI terrorists and sustained 5 gunshots. All this happened while he suffered from a terminal heart failure condition.

He required surgical intervention for his heart and he came to BLK a year ago. Dr. Ajay Kaul – Chairman & Head of CTVS, BLK Heart Centre and team with advanced Artificial Heart Transplant (LVAD) gave him a new lease of life. Post implantation, patient was on constant & consistent follow up with Dr. Kaul and his team in order to maintain his parameters.  One year of continuous monitoring and medications helped recuperate the ailing original heart. A year after he came back to BLK Super Specialty Hospital for follow up and after thorough investigations, doctors found the original heart had restarted functioning properly even beyond their expectation. Hence, they weaned off the artificial heart and Jawad’s own natural heart started beating again normally without any support.

‘Hani Jawad visited us in a critically ill state a year back – with a failing heart and rapidly deteriorating health condition.  He was given an option of a heart transplant or artificial heart implant.  But because of the acute shortage of donor’s heart and serious condition of Hani Jawad, Artificial Heart Transplant was one and only alternate we had to save his life.  Post-surgery he was in constant follow up with us and we were monitoring his Implant and his natural heart which was put on medication and rest’ explained Dr. Kaul

‘After a year now when he came for follow up, we found that the patient’s own heart which was failing before the implant was responding very well and beyond our expectations.  With a well thought planning, we monitored his original heart’s functioning by slowing down the artificial implant’s functioning.  We repeated the process 3-4 times in over two months and realised that his heart gradually started recovering after having a rest of about a year. Generally, in such condition, the original heart may show recovery of 10-15% but his heart functioning was way better, which is more like a medical miracle.   Post confirmation we weaned off the artificial heart with new technology without operating him again,’ added Dr. Kaul,who has invented an innovative and most advanced technique of weaning off the support of the artificial heart.

Jawad recovered well and credit goes to the benefit of modern miracles of medicine not just to save him from the terminally ill conditions but also getting a good quality of life. Jawad said, ‘I am very happy and thankful to Dr. Ajay Kaul who gave me a new lease of life with natural heart once again. I had several attempts on my life. The first was one being the in captivity of terrorist, where I managed to escape. Even after having received multiple gun-shot injuries, I survived after multiple surgeries and finally an Artificial Heart Transplant here. It is a new birth, from the failed heart to artificial heart to natural one once again.’

Dr. Kaul said, ‘Jawad’s story is an example of a modern medical miracle of medicines which lead him to a better quality of life. It is considered to be the first time in India & probably in Asia. An artificial Heart (LVAD) which is considered as a bridge to transplant and generally patients wait for receiving a cadaveric heart as the final treatment.  But in his case, artificial heart transplant has proved as destination therapy with complete recovery of his ailing heart to a normal heart.’

‘India is fast becoming the preferred healthcare destination for people suffering from various terminal diseases like the one Mohammed had.  Highly experienced experts, quality treatment, state-of-the-art technologies and a growing compliance on international quality standards are paving way for demand of medical treatment in India,” concluded Dr. Kaul.

The Iraqi businessman couldn’t even walk a few steps and was on a wheelchair when he first came to BLK Super Speciality Hospital last year. He was refused surgery at many hospitals because he had multiple operations for gun-shot injuries and was extremely high risk. The major threat to his life was a severe heart failure, which he noticed in the year 2017-18. With no hope, he had contacted Dr. Kaul at BLK Hospital and underwent implantation of LVAD (Artificial Heart) in July 2018.