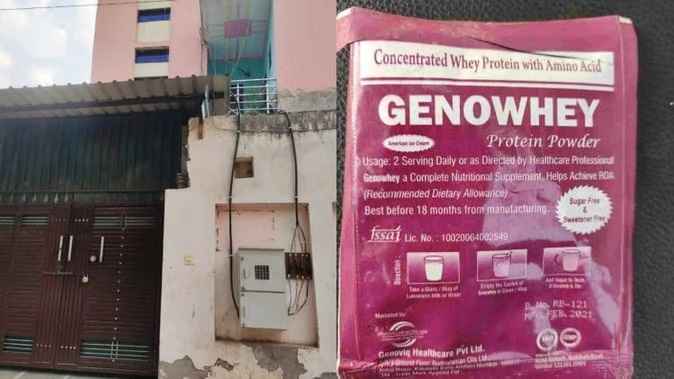 Sonipat : Fake medicine for cancer was being made under the guise of making food supplements on Badshahi Road. The factory was running here for about five and a half years. The Delhi Crime Branch team has arrested the factory owner Ramkumar from Ganaur. It is said that while making food supplements, the accused joined the gang selling spurious cancer medicine and started preparing medicine for them. There was never any inspection in the factory. Now the team of Delhi Crime Branch disclosed the matter, then the officials also took the samples and along with sealing the factory, the Ayurvedic officer canceled the license. It has been told that the license has been canceled due to non-availability of records.

The team of Delhi Crime Branch and the team of officers of Ghaziabad, Noida and Bulandshahr of the Drug Department had caught the factory making fake cancer medicine. Stocking and manufacturing of medicines without license was being done here. The team then raided Gannaur and arrested the owner Ramkumar from RDM Biotech Company located at Badshahi Road.

He has a factory here to make food supplements and Ayurvedic formulations. He had set up this factory in the year 2016. For this a license was taken from the FSSAI. Not only this, in the year 2020, he had also taken the license to make indigenous medicine from the District Ayurvedic Officer’s office. In this factory, that food supplement was made under the name of Genowhey. It was prepared here in the form of protein powder, so that no one would doubt it.

And after being taken to Ghaziabad, it was packed as a medicine for cancer. No district, state or central team ever investigated this factory. He also did not provide necessary information to the department. The raid was conducted here after the gang members were arrested by the Delhi Police.

A team of Central Food Drug Administration, State Food Drug Administration, Drug Department, Food Inspector and State Ayurvedic Officer raided here. 20 sacks of calcium carbonate and starch (maize flour) were found. Two samples each have been sent for investigation. The machines found in the factory have been sealed. It has been said that food supplements were made here till four years ago. After that fake medicine for cancer started being prepared.

It has been said that only five-six women workers used to work in the factory. She used to look after the work of packing here. Ramkumar and another used to make medicines. The women working in the factory were also not educated. Their job was to pack the goods provided there. They didn’t even know what was being made.

“The team raided on Saturday. Raw material has been found in 20 sacks in the factory. Starch and calcium carbonate are written on its packaging. Their samples have been sent for investigation. This factory was under the supervision of central authorities.”
-Virendra Singh Gehlawat, District Food Safety Officer, FDA, Sonipat