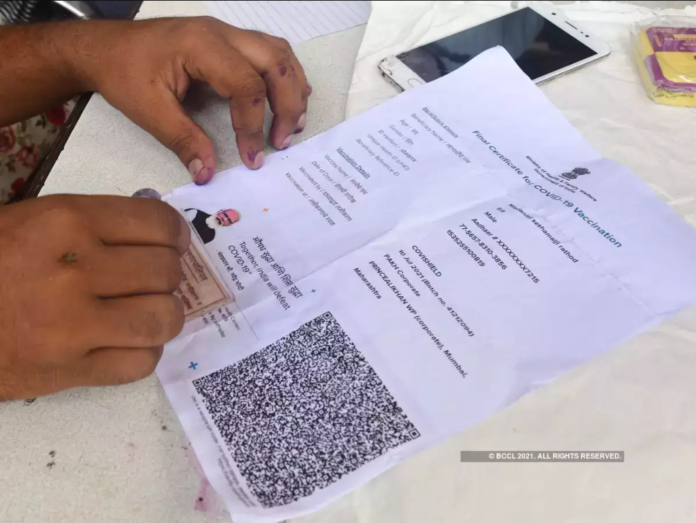 The police said that the four arrested accused, Shahnawaz Shaikh, 35, Siraj Ansari, 46, Dipak Mehta, 30, and Pintu Patil, 30, resorted to the dangerous trick to make quick money. Patil is an operator working in a mobile vaccination van while the other three accused are agents who brought in the beneficiaries and charged them anywhere between Rs 1,000 and Rs 2,000 per person, depending on their paying capacity.

It was in mid-November when the Daighar police station under Thane police unearthed the scam based on a tip-off received by constable Vikrant Kamble that the accused were issuing vaccination certificates without administering the jabs. Kamble informed his senior inspector Sachin Gawde who set up a team comprising assistant police inspector Pradip Sarfare and constable Dhananjay Ahir. A decoy was sent and other members of the team sent a decoy to Shaikh for obtaining the certificate. Shaikh in turn contacted Patil who took the Aadhar card details and got them the certificate which was issued from Azamgarh in Uttar Pradesh and bore the same batch number for both the vaccination certificates which was impossible as there has to be 186 days’ gap between two jabs, said a police officer.

The complete chain of the gang was busted and more than 80 such certificates were seized. A police officer explained how the accused scamsters exploited the onsite registration facility.

“The onsite registration is used in rare cases, wherein one doesn’t require the OTP as it is kept for the people who don’t have mobile phones or those who cannot get the OTP on their mobile phone due to technical reasons. This process is used rarely or on an SOS basis but here the accused misused it for the monetary benefit.”

The police said that they have found the links of the scam to places in Uttar Pradesh, Bihar and Gujarat. “We will soon be probing the links there and the entire system chain of the scam,” said a police officer.

Interestingly, most of the people who were issued the fake certificates were not taking jabs due to rumours or misunderstandings that it may cause paralysis as well as impotency or lead to other physical ailments or even death.More than 90% beneficiaries of these 80-odd certificates are senior citizens and belong to a particular community, the police said.

As vaccination certificates are being increasingly made mandatory for travel by public transport and other purposes such as visiting malls, there are many who want to acquire them without actually undergoing the vaccination process. “We are in touch with government hospitals to vaccinate the people who have received these fake certificates,” a police officer said.