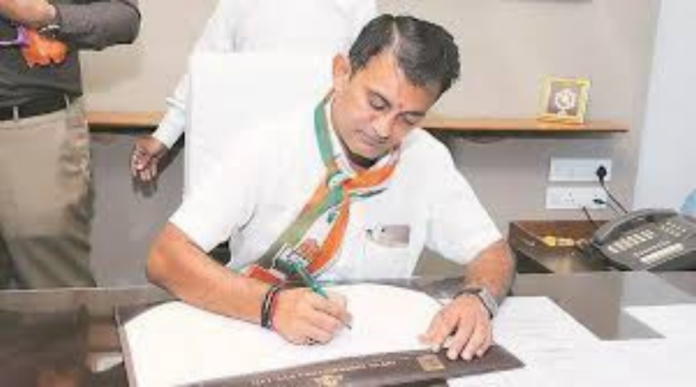 Ahmedabad : Leader of Opposition in Gujarat Assembly, Paresh Dhanani, has termed the preliminary inquiry by the Food and Drug Control Administration (FDCA) that gave a clean chit to BJP state chief CR Paatil who distributed Covid drug from BJP office in Surat as “politically motivated and completely biased”.

In a rejoinder affidavit filed before the Gujarat High Court in connection with his petition on the “illegal distribution” of Remdesivir, Dhanani has relied on the Delhi High Court order that expressed dissatisfaction with the Drug Controller’s investigation and clean chit to BJP MP Gautam Gambhir and AAP MLAs of Delhi, who had distributed Fabiflu in Delhi during the peak of second wave of the Covid pandemic.

Navsari MP and Gujarat BJP president CR Paatil and MLA Harsh Sanghvi courted controversy in April when amid a dire shortage of the antiviral drug Remdesivir, Paatil had announced that 5,000 vials of the drug would be given free of cost to needy patients from Surat BJP office.

Contesting the clean chit given by Food and Drug Control Administration (FDCA) to Paatil and Sanghavi based on preliminary inquiry, a report of which was filed before the HC, Dhanani submitted that the FDCA has carried out “absolutely perfunctory, premeditated and peripheral inquiry inconsistent with the statutory obligation and devoid of their statutory functions and duties”.

Dhanani highlighted that his PIL raises two fundamental questions — one about two elected representatives belonging to BJP taking lead in purchasing, collecting, hoarding and distributing Remdesivir on charity from the BJP office with a political overtone and the second “abject failure on the part of Respondent 7 (FDCA)” in implementing Central government’s directives and failing to ensure that “no private individuals or association collects Remdesivir injection in large number and distributes the same in private initiative”. The matter has been posted for further hearing for August 4.