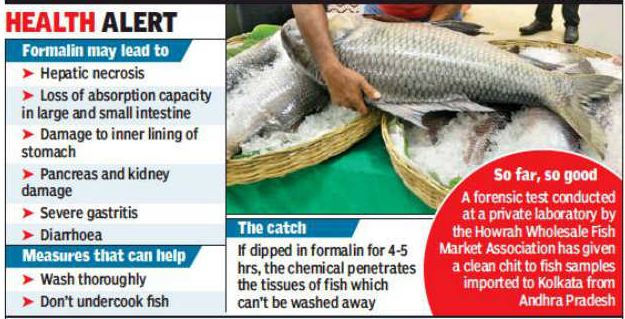 KOLKATA: Consuming fish preserved with formalin could have serious long-term health repercussions, warned doctors even as traders claimed that the supply that reaches the city from other states was safe and chemical-free.

Formalin in fish may be fatal in long run: Doctors

There has been a lot of turbulence of late when it comes to the sectors that provide protein on our plate. So many disturbances in the supply chain affect everyone, from the supplier to the consumer. Knee-jerk action from government agencies can do a lot of harm. These agencies should clear the air as soon as possible, through proper and transparent lab tests.TimesView

Infiltration of formalin into the system could damage liver cells leading to hepatic necrosis, warned consultant Arindam Biswas. “It could also affect the absorption capacity of the small and large intestine. In the long run, formalin affects pancreas and kidney, damaging them irreversibly,” he said. Biswas, however, added that the consumption has to be prolonged. “Kolkatans consume fish almost everyday, so the chances of formalin-induced organ damage are high if the chemical is indeed being used for preservation,” he said.

Neither suppliers in Andhra nor wholesalers in Kolkata used formalin, claimed Anwar Maqsood, secretary of the Howrah Wholesale Fish Market Association. “We can vouch for the fact that formalin is not used till fish reaches wholesale markets. Some retailers might be using the chemical but the volume would be negligible,” said Maqsood. He added that some fish like topshe, pabda and kajli were dipped in colours by retailers to make them more saleable.

Fish should be washed thoroughly before cooking, advised AMRI Hospital consultant Debashish Saha. “Traces of formalin may cause severe gastritis and diarrhoea. Consuming the chemical for years could also lead to gastric carcinoma,” he said. If fish is dipped in formalin for four-five hours, the chemical penetrates the tissues which can’t be removed by washing it, warned Biswas.

Use of formalin also indicated that half-decomposed fish was making its way into the Kolkata market, felt Saha. “Toxins from decomposed fish could seriously affect the gastro-intestinal system,” he said. The sharp rise in the number of gastro-intestinal cancer cases can be linked to chemicals in food, according to oncologist Gautam Mukhopadhyay. “Regular ingestion of chemicals may corrode the inner lining of stomach, leading to a cellular change and eventually cancer. It is difficult to identify whether a particular chemical is responsible for cancer in a patient, but food should be screened. We need a strict vigil,” said Mukhopadhyay.