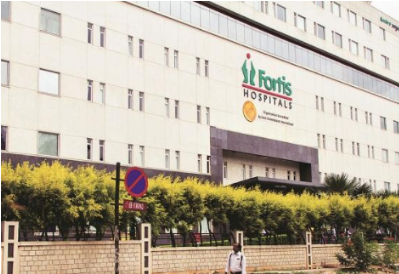 New Delhi: Fortis Healthcare on Monday said its board has again deferred approval of quarterly and annual financial results for the period ended March 31, 2018, saying more time is needed to consider the aspects of outcome of an internal investigation on alleged financial irregularities.

The date for the approval of the said accounts will be June 25, 2018, the company said in a regulatory filing.

Meanwhile, the company in another filing said the date for submission of the binding bids stands revised to June 28, 2018.

Explaining the reasons for the deferment of approval of financial results, Fortis said the internal investigation conducted by Luthra & Luthra Law Offices, as initiated by the Audit and Risk Management Committee, has been completed and their report was made available on June 8, 2018.

“The same was duly placed before the Audit and Risk Management Committee and the Board at their meetings held today,” the company said.

The report has been shared with the statutory auditors and is being submitted to SEBI and SFIO forthwith, it added.

“In light of the above, the completion of the audit and accounts will require additional time to consider the aspects of the report comprehensively in the financial accounts,” Fortis said.

The company, however, did not share the details of findings of the report.

On May 30, the company had postponed board meeting scheduled to consider financial results for the fourth quarter and financial year ended March 31, 2018, to June 11.

It had cited deliberations on the conclusions of the internal investigation on the alleged financial irregularities in the company as reason for the deferment.

The healthcare chain, which is currently in the process of finding a buyer, had appointed the law firm in March to investigate allegations of fund diversion from Fortis Healthcare by former promoters Singh brothers.

Markets regulator Sebi is also investigating the matter related to alleged lapses at Fortis Healthcare and Religare Enterprises. Apart from Sebi, the Serious Fraud Investigation Office (SFIO) has also initiated a probe into the alleged financial irregularities at the two companies.

The investigations were initiated by the agencies against the backdrop of reports that Fortis Healthcare promoters Malvinder Singh and Shivinder Singh took at least USD 78 million out of the company without any board approval about a year ago.

Fortis Healthcare on May 29 said it has decided to initiate a fresh time-bound bidding process for its sale after terminating the offer made by the Munjal-Burman combine.

The deadline for submitting fresh binding bids was fixed for June 14, 2018. But, it has now been revised to June 28.

The Munjal-Burman combine had given their consent to re-open the bidding process. After it started the process to seek buyers for its business in late March, Fortis Healthcare elicited good response from potential bidders, with some of them making competing offers, before the board accepted the offer by the Munjal-Burman combine.

Shares of Fortis Healthcare Ltd Monday closed at Rs 143.60 per scrip on BSE, down 1.68 per cent from the previous close.