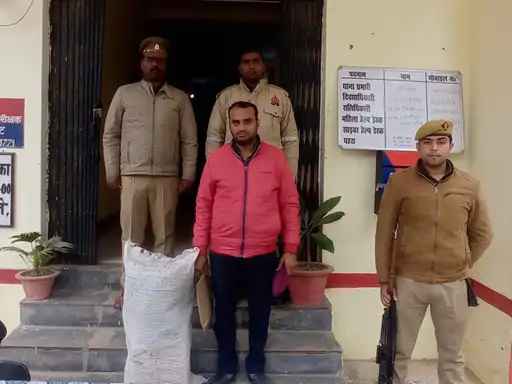 Kaushambi : Mahevaghat police arrested a youth from Ghonghpur village with govt supply medicines. Police have recovered injections, syrup and tablets written ‘NOT FOR SALE’ hidden in a bag. Police have registered a case under various sections of IPC and DRUG Act.

Police are interrogating the accused and trying to find out the govt employees who gave the govt supply medicines to the accused to sell in the open market.

The police have started action by taking him into possession along with the car. Most of the drugs recovered are high antibiotic injections, tablets and syrups to cure cold, cough, stomachache, and fever. Drug Inspector Divya Prakash Maurya said that a large consignment of govt supply medicines was recovered from the operator of a private medical store. ‘NOT FOR SALE’ is written on the medicine boxes. Expiry date is also correct.

Inspector Mahevaghat Roshan Lal said that the police got success during vehicle checking. The youth is said to be a medical store operator. The accused was going to sell the medicines used by the govt in the rural area in the car of the youth. A case has been registered against the accused under sections 406, 420, 411 of the IPC and sections 18, 27 of the Drugs and Cosmetics Act, 1940.