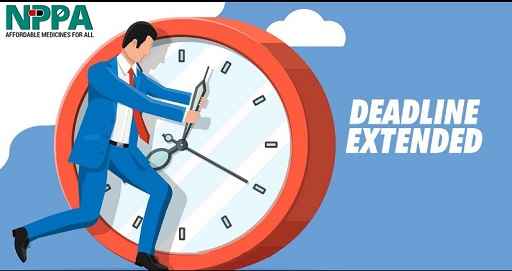 New Delhi : The National Pharmaceutical Pricing Authority (NPPA) has extended the last date of filing statutory forms related to quarterly production and sales data for scheduled drugs and medical devices for the two quarters ended September and December, 2022, for a period of up to February 15, 2023.

It has earlier issued a direction extending the time limit for the filing of these data for the quarter of September, 2022, for three months till December 31, 2022 after the Authority received several representations from the industry requesting for extension of the last date for filing.

The industry needs to periodically file the statutory Form III (for submission of quarterly return in respect of production/import and sale data for drugs under the National List of Essential Medicines), Form V (which is an intimation about the Maximum Retail Price change of scheduled and non-scheduled drugs), and Form VI (which is to intimate the Authority regarding the MRP change of medical devices) with the NPPA as per the Drug (Prices Control) Order, 2013.

While the data under Form III has to be submitted within fifteen days from the end of the quarter as per the rules, for the quarter ending September and December, 2022, it can be filed up to February 15, 2023.

Similarly, for any MRP revision done between August 1 to December 15, 2022, the Form V can be filed up to January 31, 2023, as against the prescribed time limit of fifteen days from the date of price revision, can be filed in Form V up to February 15, 2023.

Under the Form VI, which was inserted by the Department of Pharmaceutical through an order on July 20, 2021, for the intimation about MRP change of medical devices, has to be filed within a period of fifteen days of price revision, according to the price regulation. The NPPA, through the office memorandum, stated that for any MRP revision done between August 1 and January 31, 2023, the Form VI can be filed up to February 15, 2023.

The NPPA has issued a similar Office Memorandum in September 21, 2022, extending the time limit for submitting the data under these three forms for the quarter ending September, upto December 31, 2022.

The Authority in the past also issued orders extending the time limit for submission of the Forms related to the production and sales and price data for drugs and medical devices in response to the requests from the industry.

The forms have to be submitted through IPDMS 2.0, implemented by the NPPA for online information collection from pharmaceutical manufacturers to monitor and regulate the pharma and medical devices prices, to ensure availability and affordability of drugs and medical devices in the country.