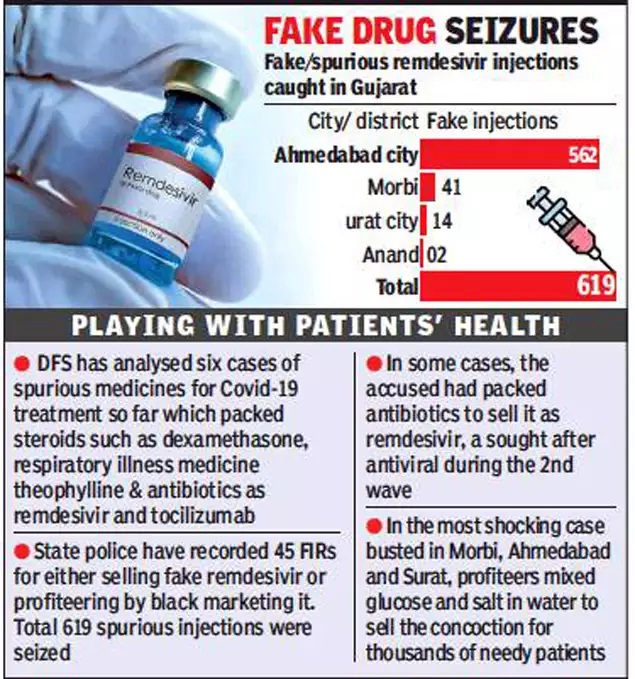 AHMEDABAD : What did the spurious injection vials of tocilizumab and remdesivir contain which were sold for thousands of rupees to desperate kin of Covid patients at the peak of the pandemic in April and May in Gujarat? State police investigators and forensic sciences experts say the drugs contained anything from steroids to salt – giving no respite to the patients and posing a grave health hazard.

Sources at state Directorate of Forensic Sciences (DFS) said that the experts have so far received six samples – primarily from cities like Ahmedabad and Surat – to ascertain the contents of the seized injections.

“In a tocilizumab injection we analyzed, we found dexamethasone and theophylline. The first one is a steroid and the second one is a drug used in respiratory illnesses. The mixture is potentially dangerous as it contained steroids in a higher than permissible amount,” said a forensic science expert. “In another vial, we found antibiotics injected through a sealed cap. The accused had also changed the label to pass it off as a genuine drug. A dose of such drugs could be lethal if administered.”

State DGP Ashish Bhatia said that sustained action was initiated against those profiteering from remdesivir and trying to sell off spurious injections.

Chaitanya Mandlik, DCP (crime) of Ahmedabad city police, said that they recorded multiple modus operandi involving spurious injections. “In one instance, the accused had mixed antibiotics piperacillin and tazobactam to pass it off as remdesivir, whereas in another the accused had made the antiviral using its powder form. But such practices are also dangerous as they must be consumed within stipulated time,” he said. The DCP added the accused have been booked under Drugs and Cosmetic Act, Disaster Management Act and Essential Commodities Act along with sections of IPC.

‘Fake vials sent to other states too’

In one of the most shocking discoveries by state police probing spurious remdesivir injections, a group of six accused were selling concoction containing glucose and salt, passing it off as genuine antivirals. Morbi police booked the accused with 3,371 vials in May from Morbi, Ahmedabad and Surat. The accused had confessed to having sent the injections outside the state, too.

Dr Maharshi Desai, a citybased critical care specialist and member of state-appointed Covid-19 Task Force, said that the drugs must not be bought from unreliable sources. “Any spurious drug has grave health complications for Covid-19 patients. It’s unfortunate that some saw profit even in the essential medicines,” he said.