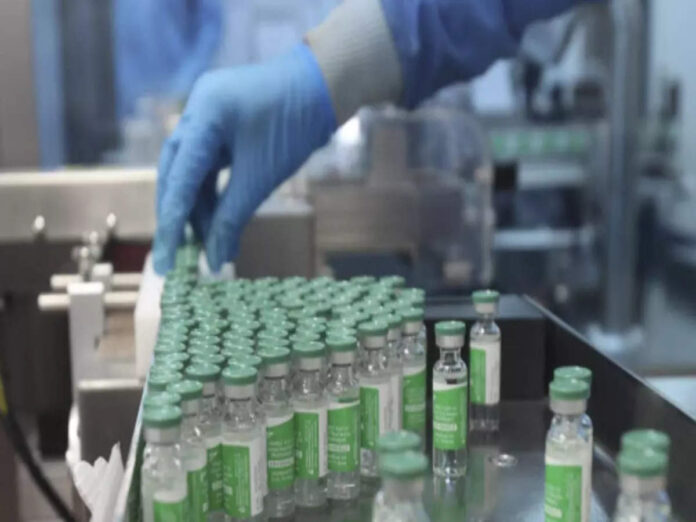 NEW DELHI : Like street vendors calling attention to their wares, two women health workers from Assam were recently seen in a viral video carrying a blue box strapped to a bamboo pole and shouting: “First dose. Second dose. Corona vaccine. Anybody left out?”

The act may have amused many, but seen in the context of India’s imposing inoculation target and the anxiety of the health establishment over unused vaccines going past their expiry date, there is suspicion this goes beyond comic relief. Most officials TOI spoke to, however, scotched fears of vaccine wastage, or those about to expire being offered as booster shots secretly, or expired doses being dumped.

Hospital administrators, particularly those in the private sector, have adopted ingenious methods to clear their vaccine stockpile — including cutting the price of shots, using corporate social responsibility (CSR) funds to vaccinate people for free, and exchanging doses with other hospitals to use up the idle stock.

The Serum Institute of India (SII), makers of Covishield, has been encouraging private hospitals to buy from those having doses in excess, instead of placing a fresh order. “We paid SII and it diverted the money to another hospital that gave us the required cache,” said Dr HK Sale, executive director of Noble Hospital in Pune. 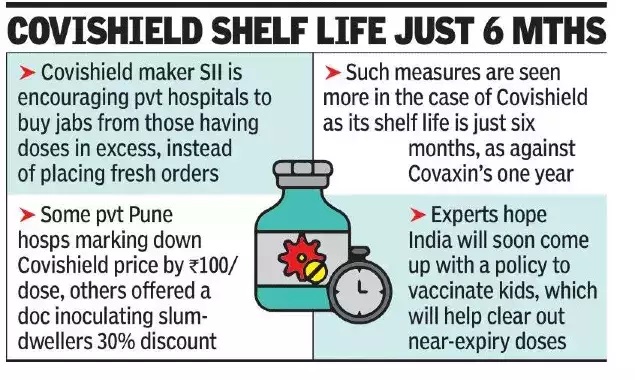 Such measures are seen more in the case of Covishield as its shelf life is just six months, as opposed to Covaxin’s one year. Health experts hope India will soon come up with a policy to vaccinate children below 18 years, which will push up demand and help clear out near-expiry doses. As of November 12, India had vaccinated 36.2 crore people, or 26.2% of its population, with its supply chain reaching places off the map.

Private hospitals in Pune district have around 2.5 lakh doses, a large chunk of which will expire either in January or February. “We are struggling to clear 6,000 doses of Covishield for more than two months. We marked down the price of each dose by Rs 100, but there’s not much hope as their use-by date is February 28,” said Dr Jitendra Oswal, deputy director of Bharati Hospital in Pune.

Private units charge around Rs 800 for a jab. According to Dr Prince Surana from the Surana Group of Hospitals that has tied up with business houses to inoculate slum-dwellers, hospitals approached him to offload their stock, particularly Covishield. “I was offered a discount of up to 30%,” he said.

Private players stocked up on Covid vaccines after availability improved in June, anticipating the summer’s high demand to stay. The peak of the pandemic’s second wave had coincided with a reported shortage of vaccines. “They (private hospitals) failed to factor in the public sector that picked up at least three times more doses than private units and gave shots without charge,” a hospital administrator in Mumbai said, explaining the correlation between falling demand in private hospitals and about-to-expire vials remaining on the shelf.

The concern over “dead stock” has been more acute in big urban centres. Dr Bharat Gadhvi, president of Ahmedabad Hospitals and Nursing Homes Association, said: “The bigger issue is wastage as we lose about 5-6% of our stock to unused vaccines.”

Most states, however, have reported little wastage in the public sector. Some like Maharashtra are unaware of the volume due for expiry in the private sector that held more than 45 lakh doses till a week ago.

Hospitals have been limiting procurement to small batches, and vials nearing the expiration date were used first. In Tamil Nadu, camps for free shots with CSR funds covering the expenses helped several private hospitals exhaust their stock, said health minister Ma Subramanian. UP has restricted the private sector’s role to prevent wastage. In Madhya Pradesh, immunisation in-charge Dr Santosh Shukla said the state’s current stock of over one crore doses is within its targeted requirement. “As for waste, MP’s consumption is +3% (extracting the 11th dose from a vial of 10).”