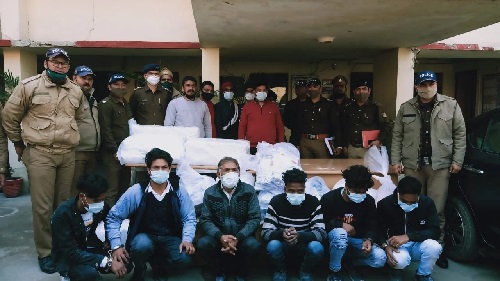 Police said fake medicines worth over Rs 2 crore were also recovered from the unit.

The kingpin of the gang, identified as Vipin Kumar, a resident of Manglaur in Haridwar district, is a history-sheeter and was earlier arrested by Roorkee police for the same crime, officials said.

Acting on a tip-off, a joint team of police and drug department raided the factory.

CO, Kashipur, Veer Singh said that the accused have been identified as Sahdev Gupta, Devraj Gupta, Ravindra Kumar, Vasudev, residents of Bareilly in Uttar Pradesh, Udit Kumar of Moradabad district in Uttar Pradesh, Jagmohan Verma and Paakesh Singh of Kunda in US Nagar, Pradeep Singh of district Hardoi in Uttar Pradesh and Sachin Kumar, a resident of village Maaldhan in Nainital district.

They have been booked under the Drugs and Cosmetics Act, 1940, and sections 420 (cheating), 120B (criminal conspiracy), 274 (drug adulteration), 275 (adulteration of drugs with less efficacy) and 276 (knowingly selling fake drugs) of IPC and Trade Mark Act and 63 Copyright Act.