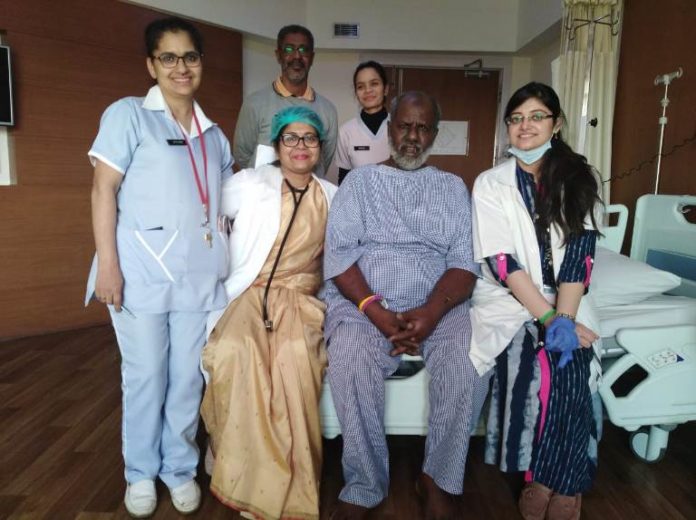 But team of Dr. Sudha Kansal, Respiratory Medicine, Critical Care & Sleep Medicine and Dr. Mukesh Goel, Senior Consultant, Cardio Thoracic & Vascular Surgeon successfully treated him and snatched him from jaws of death. Dr Kansal said, ‘Breathlessness is a major symptom of Swine Flu, yet it gets ignored. Ali is already a patient of hypertension and type II diabetes. He came to Apollo with severe breathlessness and cough with mucoid sputum which progressed to multiple organ failure and lower Gastro- intestinal bleeding.

Explaining about the patient’s condition, Dr. Sudha Kansal said, ‘When the patient was brought to the hospital, he had very high fever, acute breathlessness and cough. He was required to be put on mechanical ventilation within 24 hours of his admission. Despite high ventilating support, his oxygen levels were not maintained. He had to be shifted to prone ventilation (mechanical ventilation that improves oxygenation in patients with acute respiratory distress syndrome). However, he still continued to be hypoxic (low oxygen level) and his condition was deteriorating day by day.’

‘Considering his critical condition we decided to put him on ECMO (Extracorporeal membrane oxygenation) support. Through this technique, prolonged cardiac and respiratory support can be provided to persons whose heart and lungs are not able to provide sufficient amount of gas exchange or perfusion to sustain life. He had a stormy course with multiple episodes of fits that required high dose medicines to control it. Later, he also developed bleeding in the lower part of large intestine requiring multiple blood transfusions. Due to this, we even had to reduce the dose of a blood thinner which is required during ECMO,’ said Dr. Mukesh Goel.

‘With all these efforts, his condition improved gradually and he came off the ECMO support after about eight days.  He was also found to have profuse muscle weakness (critical illness myoneuropathy). Hence, his tracheostomy was done. In this, an incision in the trachea is done opening a direct airway. Slowly, he came off the ventilator and the tracheostomy was closed. With intensive physiotherapy his muscle power also improved steadily and he was discharged from the hospital on a wheel chair,’ further added Dr. Sudha Kansal.

‘The patient is doing all fine now and he came walking to the OPD one week after the discharge. We are delighted the see his progress,’ Dr. Sudha concluded.