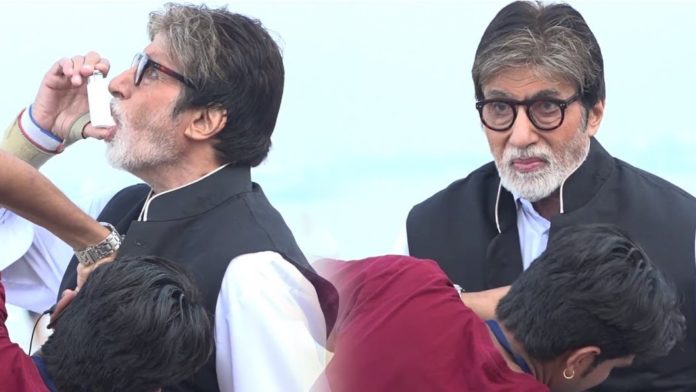 New Delhi: Inhaler has been a standard bearer from ages in the management of Asthma. Inhaler may have advanced and improved a lot but in India it is still stuck in the medievalism. On the World Asthma Day, experts have coaxed people to free this most effective weapon to keep asthma at bay from their worn out thinking.

Medical science has not been able as yet to its alternative which is as much effective in the treatment of Asthma. Asthmatic Amitabh Bachhan and Priyanka Chopra and their likes all over the world have made its use public. Experts say this should sink in the mindset of people in general. They say if inhaler could be extricated from taboo, it could be a game changer in India, though with little effort they can hide the fact too from public gaze if they want.

Inhaler is not a modern breakthrough. Inhaler that asthmatics apologetically use today is only an advanced and improved version of the primeval one. Its invention goes back to time immemorial. It is gold standard method of sending drugs directly in the lungs. As today, even long ago, inhaler was as much efficacious and more effective treatment than the oral medicines.

The inhaler came into being when physicians realized that the most effective way to treat asthma is to send the medicine straight to the airway. After this realization, inhaler was invented about 200 years ago. Talking to Medicare News, Dr Anant Mohan, Head of Department, Chest (Pulmonary Medicine), AIIMS said, ‘Lung targeted therapy is not new. But over the years it has advanced and modern inhalers are most effective and patient friendly. Asthmatics should not remain cautious about their effectiveness and safety.’

Dr Mohan further said, ‘No tablet or syrup taken through the mouth can ever be as effective as the same medicine (taken in actually much smaller doses) by an inhaler. Reason being, the tablet/syrup takes a circuitous route from mouth to food-pipe and stomach, then enters the blood-stream to pass through almost all parts of the body and finally reach the airways where it needs to act.’

Talking to Medicare News, Arvind Kumar, Chairman, Centre for Chest Surgery and founder of Lung Care Foundation, said, ‘ in India people need to start believing that inhalers are much safer than tablets and syrups, for both adults and children. The stigma and suspicion surrounding inhaler have to go for the better management of asthma in India.’

Though asthma controller medicines are also available in the tablet and syrup forms, inhaler therapy remains the best possible way to control asthma symptoms on a regular basis. New and better drugs for asthma control are available but its long term use orally has tremendous side effects. But the same medicine taken through inhaler is marked by lot lesser side effects. When it was invented the inhaled steroids had a huge edge over the tablet steroids, containing doses almost 40 times lower. Within months to a few years of their availability, they became the cornerstone of asthma treatment.

A vast array of studies in the past over 30 years now suggest that steroid inhaler therapy is the most effective and safest way to treat asthma. In developed countries like the US and the UK, inhaled therapy dominates the treatment approach for any airway disease, and patients there hugely benefit from the ease, rapidity and positive outcomes of its use – so much so that there is little stigma at all to use an inhaler any longer – unlike in India.