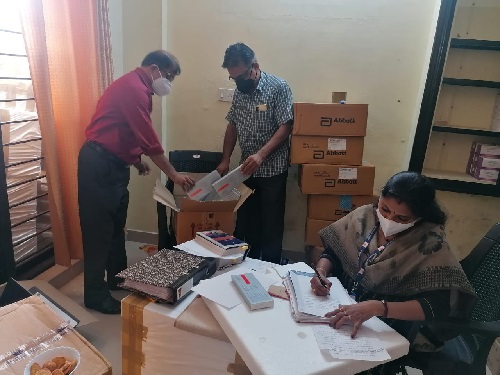 Chennai : The sleuths of the special intelligence branch of the Kerala drugs control department has raided and seized illegal stock of imported breast cancer drug, Zoladex LA 10.8 mg, worth Rs. 11,55, 600, from a wholesaler’s premises in the state capital.

The injection formulation is manufactured by the UK based MNC, AstraZeneca, and is marketed in India by its marketing company, AstraZeneca Pharma Private Ltd in Bengaluru.

“Zoladex LA, a brand of AstraZeneca, is not permitted to be stocked by private vendors and strictly restricted for retail sale. It is authorized for distribution to the neediest patients through government hospitals only. However, there are distributors who got special approval from the health department for government supply and are permitted to stock this formulation in a licensed premises”, said M K Geetha, drug inspector in the intelligence wing, who led the operation.

She said private medical shops cannot stock this medicine for government supply without authorization. The stockist at Thiruvananthapuram could not produce any government authorization to the investigating officials. Action has been initiated against the dealer as per Section 65 (18) of the Drugs and Cosmetics Act.

It is learnt that, on prima facie, the enforcement officials of the drugs control department could not find any proof of government approval for stock of the medicine in the wholesaler’s premises. More investigation is going on, said Jayan Menon, state drugs controller.

He said the department has served a notice to AstraZeneca seeking proof of supply of the items to the dealer in Thiruvananthapuram.   The products were seized from the godown of ‘Karunyam Pharmacare’ at Murinjapalam in the capital city. All the seized products were produced before the additional CJM court. The unit MRP of the formulation is Rs. 28,890.

Briefing Pharmabiz, Jayan Menon said the drug is only for government supply and cannot be sold privately. Medical shops are not permitted to sell the products. Its label contains the warning “only for government sale”. Somehow the department got information from sources about the sale of the drug through the medical shop. Immediately the department officials launched a crackdown on the private pharmacy and seized all the stocked items and legal actions were initiated.