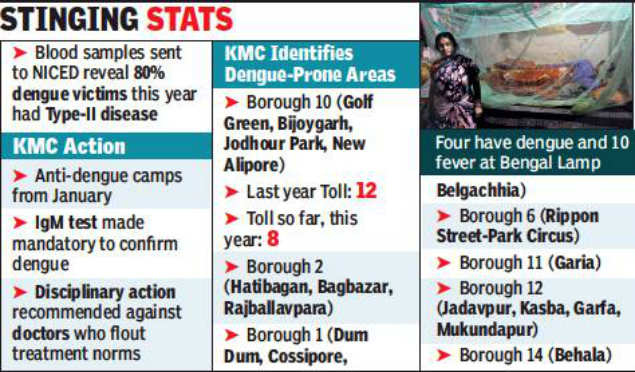 KOLKATA: Stung by more than 20 dengue deaths in Kolkata this year, the civic authorities have marked out areas that are at risk from the virus. Blood samples of victims sent to National Institute of Cholera and Enteric Diseases (NICED) have revealed that 80% had Type-II dengue, the most virulent strain.

The civic authorities have identified the Golf Green-Bijoygarh-Jodhpur Park belt under Borough 10 as the most prone, where 12 patients have died this year. Last year, the area recorded eight deaths. The Hatibagan-Bagbazar- -Rajballavpara area under Borough 2 comes second. Five more boroughs in south and central Kolkata have also been listed as risk zones.

Kolkata: This year, 80% had deadly dengue-II
Charting out a roadmap for dengue on Tuesday, MMiC (health) Atin Ghosh said other than boroughs 10 and 2, boroughs 1, 6, 11, 12 and 14 have recorded numerous dengue cases. “Each of these areas has had cases and is at risk. These places have to be monitored and measures taken to check the spread of the virus. We have decided to start dengue-prevention camps there from January,” Ghosh said.

Blood samples of dengue victims sent to the NICED reveal that 80% had type-II dengue. “This is the most virulent type and has been the predominant strain this year,” said NICED director Shanta Dutta.

Ghosh added the IgM test would now be mandatory to confirm the disease. “This will help detect if a patient has had dengue in the past, other than making sure the virus has indeed struck,” he said.

According to a KMC health official, there have been confusions over dengue treatment. “Prescribed norms for treatment have been violated by practitioners, particularly at private clinics and hospitals. Some physicians, too, are guilty of flouting norms and we have sent their names to the state health department, recommending disciplinary action,” he said, adding the deadly type-II made treatment difficult and often left doctors confused. “In many cases, platelet dropped suddenly, leaving no chance to the doctors to revive the patient. Some patients got water in the lungs after receiving saline.”

Last year, too, serotype II was responsible for 73% dengue cases. Serotypes I and III had been more common here till recently. “Our immune systems are geared to counter these strains rather than II and IV, which are now more frequent. This probably explains why deaths have been occurring more frequently,” said a consultant.