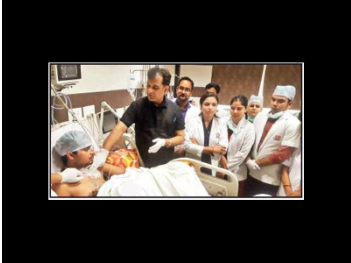 KGMU’s RICU in charge Dr Ved Prakash said it is the first such case which has been successful.

Dr Ved Prakash said on Sunday that the blood clot was completely blocking the patient’s trachea (windpipe) and it took the team of doctors about two hours to take the blood clot out.

“This is the first such case to have been successful,” said Dr Prakash.

The patient, Sandeep Katiyar, an employees of a city-based hotel and a resident of Gomtinagar, was going home after duty at night when he was hit by a speeding truck and brought to KGMU on June 25.

He was immediately stabilized and put on ventilator and expert opinion was sought.

“On bronchoscopic examination, the patient was found to have a large blood clot in his trachea apart from head and other injuries. An emergency bronchoscopy was done on July 16 and the blood clot was taken out,” he said.