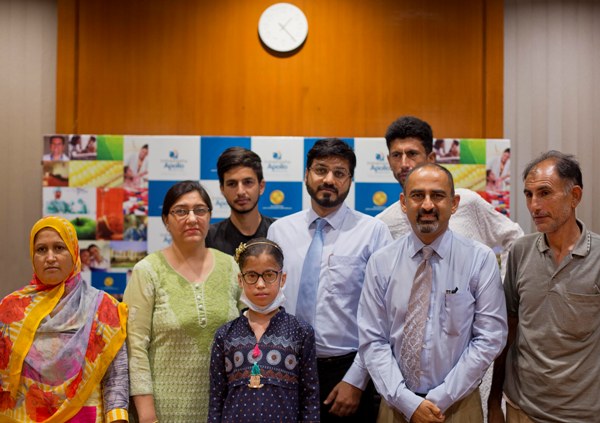 New Delhi: People with hearts of giving came to the rescue of a poor Kashmiri school girl who had only few days to live. She urgently needed a liver transplant. This turned out to be an exemplary event underlining the slogan Beti Bachao-Beti Padhao.

Apollo hospital, responsive citizens and social media came together as one to give Fatima a new lease of life. Many hearts were touched to see her plight and all of them came forward to foot the exorbitant bill.Funds was sourced through a campaign on social media; hospital, medical team and surgeons waived off fees to make transplant possible. Her father Sayyed Hussain donated a portion of his liver for transplant. He was overwhelmed by the surge of humanity that came to rescue his daughter.

A lot more money was needed even after Apollo let go of all fees. Within one week of Apollo’s appeal on social media, in all 1000 citizens contributed Rs19 lakh, so much Rs 6 lakh was left even for her future need of medicines. This turned out to be a unique story that signifies the collaborative power of medical expertise, social media and crowd sourcing. Dr. Anupam Sibal, Group Medical Director & Senior Consultant, Paediatric Gastroenterology, Apollo Hospitals, said, ‘This really underlines the emotional quotient that our society is steeped in. It also exemplifies the role of social media in saving lives. The area, Bandipur district of Kashmir, she belongs to is strife torn, known more for killing than saving lives.’

Fatimah, 7 was suffering from a rare critical liver disease known as autoimmune hepatitis and transplant, that too soon, was only treatment to save her because her liver was in a very bad condition.

The disease the girl was suffering from affects about one in two lac people. The medical condition could have taken her life in a few weeks if not treated. The successful transplant was made possible by a team comprising of Dr Neerav Goyal, Dr. Anupam Sibal, Dr Shishir Parikh, Dr. Arun Venuthuvimilli, Dr. Vaibhav Kumar, Dr. Namit Jerath, Dr. Vidyut Bhatia, Dr. Hitendra Garg and Dr. Smita Malhotra.

Dr. Sibal said, ‘The patient belongs from a very disadvantaged family of laborers. She studies in class sixth and was found to have jaundice in school. The patient was admitted to a hospital in Srinagar for four months with prolonged hospitalizations thrice. Her condition continued to deteriorate with time.’

Dr. Sibal added, ‘In this disease, the body’s altered immune function causes one’s own antibodies to damage the liver. The body’s immune system instead of attacking viruses, bacteria and other pathogens, attacks the liver leading to chronic inflammation and serious damage to liver cells.’

Dr. Neerav Goyal, Senior Consultant, Liver Transplant and Haepatobiliary, Pancreatic Surgery Department further added, ‘Fatima had deep jaundice, fluid accumulated in her belly and the pressure in the blood vessels supplying the liver was high. Her liver had already shrunken and despite therapy bringing about some improvement, the fluid accumulation in her stomach persisted. She remained chronically ill and a new liver was the only option left to save her life.’

‘We performed the 12 hour long surgery and all her liver function tests are normal now. She is fit to go back to her village,’ added Dr. Sibal.

Talking about the causes and symptoms of the disease Dr. Goyal said, “There is no particular reason or cause of this disease that why it happens, but genetic and environmental factors seem to trigger the disease. The signs and symptoms of the disease can range from minor to severe and may come on suddenly. Some of the common symptoms that one may experience are abdominal discomfort, fatigue, yellowing of the skin and whites of the eyes (jaundice), an enlarged liver, abnormal blood vessels on the skin (spider angiomas), joint pains and loss of menstruation in women. The Apollo Liver Program has now performed more than 3100 transplants, including 295 in children.”

Her father Sayyed Hussain said, ‘We are very poor and illiterate. We had no money for her transplant surgery. I convey all my thanks to Apollo Hospital and doctors who did not take any money and arranged for the extra money. Today, our little Fatimah has been blessed with a second life. I also convey my indebtedness to my many relatives’