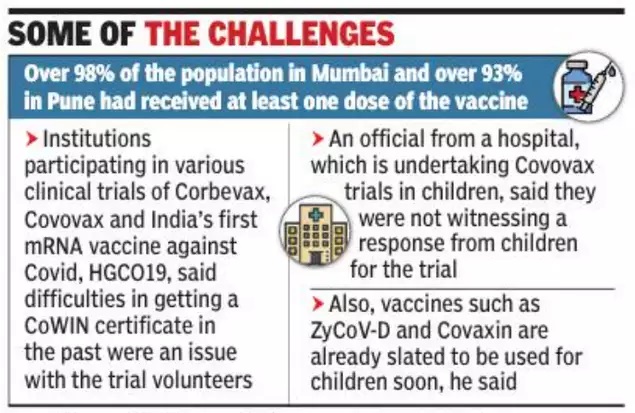 PUNE : High vaccination rates and antibodies from previous Covid infection in a chunk of the population are making it increasingly difficult for hospitals to get volunteers for clinical trials of newer and upcoming vaccines in India, hospital sites told TOI.

Hospitals conducting Covid vaccine trials told TOI that a major exclusion criteria for trial volunteers was the recent history of Covid-19 infection within three months from screening or a volunteer already having received a vaccine to prevent the infection.

Maharashtra public health department data revealed that over 98% of the population in Mumbai and over 93% in Pune had received at least one dose of the vaccine.

Institutions participating in various clinical trials, such as Corbevax, Covovax and India’s first mRNA vaccine against Covid, HGCO19, told TOI that difficulties in getting a CoWIN certificate in the past were an issue with the trial volunteers.

Dr Sidram K Raut, director of Noble Hospitals, one of the trial sites for mRNA vaccine HGCO19, told TOI, “Due to the shortage of trial volunteers after an increase in vaccination rates in the population, the trial sponsor allowed us to recruit volunteers who had Covid antibodies in their serum. However, 90 days should elapse after the Covid infection for such participants to be eligible.”

He said, “Those who have taken a Covid vaccine are also not eligible for such trials. We recently recruited 73 volunteers for HGCO19 Phase II trials at our site. Getting this number was difficult. Most willing volunteers had either been vaccinated or had antibodies from a recent Covid infection. We had to search for volunteers in the inner circle or known relations of the hospital staffers and authorities.”

Till last year, Dr Raut said, getting volunteers for new vaccines under trial was not a problem.

The principal investigator of the HGCO19 vaccine trial at another hospital in Pune district told TOI, “In the Phase III trials of the vaccine, we need to enroll 400 volunteers at our site. But getting 400 non-vaccinated people is becoming very difficult because almost all in Pune have received at least one dose of the vaccine. We are now trying to get volunteers from rural areas where the vaccination rate is relatively lower than in the urban hubs.”

Dr Akash Khobragade, principal investigator of the Corbevax trial at the Grant Medical College and Sir J J Hospital in Mumbai, told TOI, “Before being enrolled in a trial, the volunteers are screened for their immunogenicity — to check for a past Covid infection that they were not aware of. If they test positive for antibodies, then they cannot be included in the study.”

He said, “In our recent phase III Corbevax trial, we had screened nearly 1,200 volunteers and could ultimately get only 207 who were eligible to participate in the trial. This means that almost 1,000 volunteers had antibodies either from the past infection or vaccination. Many sites have thus been facing a shortage of eligible volunteers in most recent clinical trials on newer vaccines.”

An official from TN Medical College and BYL Nair Hospital, which is undertaking Covovax trials in children, however, cited other reasons for the dearth in willing volunteers. He said, “We are not witnessing a response from children for the trial. The fear of Covid seems to have gone now. With schools opening up, we thought that parents would be keen to get their children vaccinated but somehow, the response has been poor. Also, vaccines such as ZyCoV-D and Covaxin are already slated to be used for children in the near future. As a result. people feel that they would get their children inoculated as part of the government drive.”

The official said, “As of now, we are recruiting children in the 12-17 age group. There were 460 children to be recruited at 10 sites from this age group for the Covovax trials. But the recruiting process has slowed down because of low response from the volunteers. A small number of children are yet to be enrolled to complete the target.”