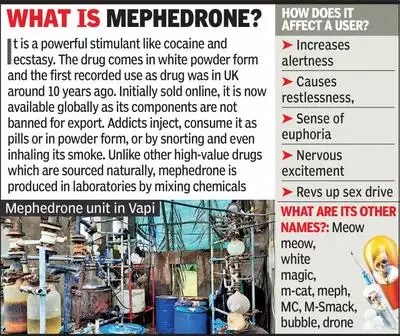 Surat : A first-of-its kind psychotropic substance manufacturing unit in Gujarat was busted by the Narcotics Control Bureau (NCB) in Vapi on Wednesday. NCB sleuths apprehended Prakash Patel, a chemist who used to manufacture mephedrone (MD), a party drug, along with another man named Sonu Ramniwas, who used to sell it.

According to NCB officials, they had received information that a drug syndicate was operating in Vapi. Based on the information, a team of NCB officials started surveillance in Valsad district few days back.

“We were tracking the accused and identified the factory where the manufacturing was taking place. Once we got confirmation, we raided the residential premises when the delivery of the drug was taking place,” said SK Mishra, zonal director of Ahmedabad zonal unit of NCB.

NCB sources said that this is the first time that a manufacturing unit has been busted in Gujarat.

Patel had come to deliver 4.5kg of MD to Ramnivas at his residence when NCB officials swooped down on them.

During the initial questioning, Patel told the cops that he was a chemist by profession and was using his knowledge to manufacture MD. However, NCB is yet to know about the ownership of the factory where Patel was making the contraband.

Officials said that more details will be revealed once they get custody of the duo from the court. “Since when were they manufacturing and who else is involved in the racket will be unearthed during further investigation,” Mishra added. It is suspected that the duo used to sell MD within Gujarat and in Mumbai too. “In the past seizures done by us were all from carriers or peddlers,” sources said.

Following the duo’s arrest, NCB raided different places owned by the accused and seized Rs 85 lakh cash. “At one property. we found Rs 60 lakh while at another, we seized Rs 20 lakh cash. The entire cash is unaccounted for, and we suspect that it is proceeds from the sale of the drugs,” Mishra said.