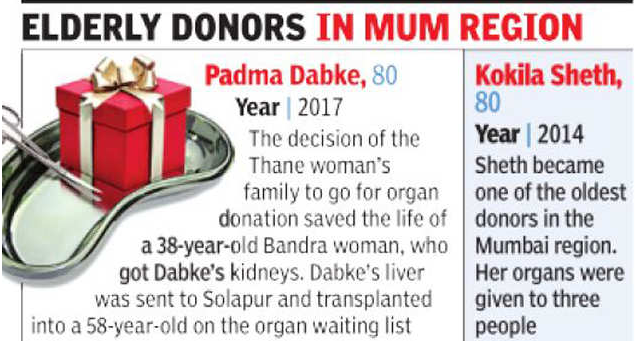 MUMBAI: An 82-year-old man on Monday became the oldest cadaver organ donor in the city and, perhaps, the state. The Thane family’s decision to donate the organs of their loved one saved the life of an end-stage liver failure patient and marked the city’s 39th donation of the year.

During a casual conversation with his sons and daughters-in-law about six months ago, the donor had expressed a desire to donate his organs if an opportunity ever arose. The retired government official had already pledged his body for medical research eight years back.

The family, which sought to remain anonymous, said they were glad to further the organ donation programme that has facilitated 116 life-saving transplants in 2018.

The octogenarian was admitted to Jupiter Hospital, Thane, after he suffered a fall at his house on September 12. Tests detected that he had suffered a brain bleed. “After about 48 hours of hospitalisation, it became clear his condition may not improve. That’s when we inquired with the doctors if his organs could be donated,” said his daughter-in-law, a doctor herself. He was declared brain dead on September 15. Transplant surgeon at Jupiter, Dr Somnath Chattopadhyay, said the donor’s organs were of good quality.

“World over it has been found that if elderly people don’t have comorbidities like diabetes or blood pressure, their organs function like a donor of any other age,” he said. They also carried out a biopsy. The 58-year-old recipient, who was registered for a cadaver liver just some months ago, is recovering well. The doctor said he is already out of ventilator support.

Incidentally, Jupiter had facilitated the earlier donations from two octogenarians in 2017 and 2014.

Transplant coordinator Aniruddha Kulkarni said the family was selfmotivated and were aware of organ donation. “They had given consent for all organs, but only his liver could be retrieved. We couldn’t find a match for kidneys as prospective recipients were reluctant to undergo a major surgery during Ganpati festival,” he said, adding the only willing patient was suffering from an ear infection and couldn’t undergo the surgery.

The 82-year-old’s skin, too, was donated. The family said he would have turned 83 in a month. “It was not just us, but even his 78-year-old wife agreed to donate. Organ donation is an important advancement and people need to start talking about it,” said his daughter-in-law.