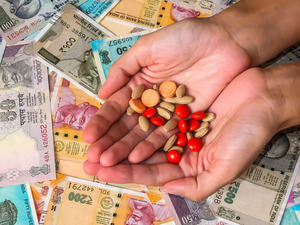 A lobby group that represents over 1,000 Indian pharmaceutical manufacturers has urged the government to allow drugmakers to increase prices of all non-scheduled drugs by 20% as the pharma industry battles rising input costs. At present drugs in non-scheduled are allowed a maximum annual price increase of 10%.

In a representation to health minister Mansukh Mandaviya, Niti Aayog, secretary department of pharmaceuticals, and chairman National Pharmaceutical Pricing Authority (NPPA), the Indian Drugs Manufacturers’ Association (IDMA) emphasised on the “serious situation” that has been exacerbated due to the escalation of input costs.

The IDMA said that the increase in input costs has affected all cost heads including key starting materials, packaging materials and transportation costs.

It sought a “one-time immediate” relief to overcome the sudden spurt by invoking special power under para 19 of the Drug Price Control Order (DPCO). Citing extraordinary circumstances, it urged that companies be “permitted to increase the prices of non-scheduled formulations by an additional 10% over the 10% allowed for non-scheduled formulations”.

It said that the 10% additional increase may be reversed once the surge in input costs abates.

The lobby group also asked to allow prices of all scheduled formulations to be increased by 10% with immediate effect. Scheduled drugs are those which are under price control and low priced.

ET has seen a copy of the representation.
According to the IDMA prices of some key APIs have increased between 15% and 130% with the price of paracetamol jumping 130%. Likewise, prices of excipients have risen between 18%-262%. The prices of glycerin and propylene glycol, solvents used in every liquid preparation including syrups, oral drops and sterile preparations have skyrocketed by 263% and 83%, respectively.

The IDMA said that the prices of intermediates have registered an increase between 11% and 175% with pencillin G registering a 175% jump.
The IDMA said increasing prices could lead to stockouts and sought urgent intervention of the government.

“We fear that the severe pressure on operating margins could lead to stockouts and shortages even for essential formulations in trade, hospitals and for government institutional supplies,” it said.