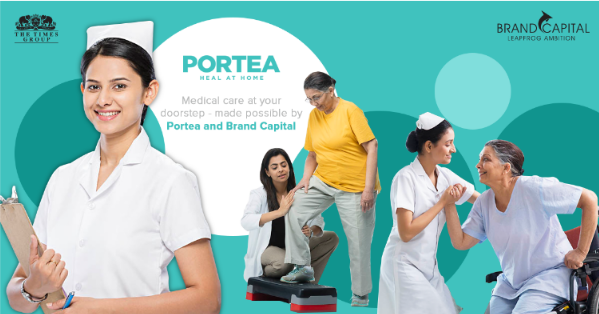 “I’m like a sponge, constantly absorbing from the people around me and different people have inspired me at different stages in my life”, said Meena Ganesh. An accomplished professional, a successful serial entrepreneur, proud mother of two and now the CEO of Portea Medical. It is a healthcare service provider that focuses on providing medical care at home, and looks set to revolutionise the healthcare space in India.

Being an entrepreneur was never really on her mind when she entered the corporate world after getting an MBA from IIM-Calcutta in 1985. Straight out of B-school, Meena went to work with NIIT in Delhi – then a hot new company in the emerging IT space. The office was in a pokey little apartment on the terrace with an open culture and a “let’s go do it” attitude. She was led by Rajendra Pawar, a hugely inspiring leader who created a very democratic, egalitarian, performance-oriented culture. The presence of a mentor, the freedom to make mistakes and the opportunity to take ownership – all these vital ingredients shaped her career.

After seven fabulous years at NIIT, she moved into a strategy consulting role at PWC, followed by a move to Microsoft, playing the role of an entrepreneur inside a large corporate. While at Microsoft, Meena had an idea to start a business that would provide services to a new, mushrooming breed of Internet companies. And, thus was born Customer Asset. The idea was to service dotcoms but soon after, dotcoms began to vanish.

After spending eight long months evangelising the call centre idea and selling the idea to prospective clients, she finally got their first customer. Customer Asset scaled up rapidly and was sold to ICICI bank in 2003 – and later got listed on the bourses as FirstSource.

Meena says that she started as something and ended up as something else. She said “You have to be willing to read the writing on the wall and the customer is the best reflection and you got to ask yourself if you’ve created something a customer just cannot do without. You may love what your company has to offer but if the customer doesn’t care, it won’t work. Perseverance maybe a virtue, but entrepreneurs also need to learn when to stop trying.”

Post the sale of Customer Asset, Meena moved as the CEO of Tesco, to set up their India operations. Five years later, she joined TutorVista – a company started by her husband – as a Co-founder, which they then sold to Pearson Education and exited the business-pocketing over $200 million which was one of the highest value exits at that time.

Post the TutorVista exit, the couple began to scan the environment for their next venture. Their search was for a real customer problem to solve. It took them to healthcare and what excited them was the white space of providing hospital quality care in the comfort of the consumer’s home. They acquired Portea Medical – a Delhi-based start-up in 2013 and Meena took over as the CEO.

Tech-enabled health at home category was at a nascent stage when Portea entered the healthcare landscape. The brand and category needed credibility through advertising to drive customer interest and transactions. Portea partnered with Brand Capital, the strategic investment arm of The Times of India and was able to create strong brand presence. This partnership created huge impact to build awareness and establish credibility. This was done through Times Group’s 360-degree media properties. It also helped them increase their long-term value from their existing customers. Portea today has widened its presence to cover over 16 cities, and employs over 4,000 people.