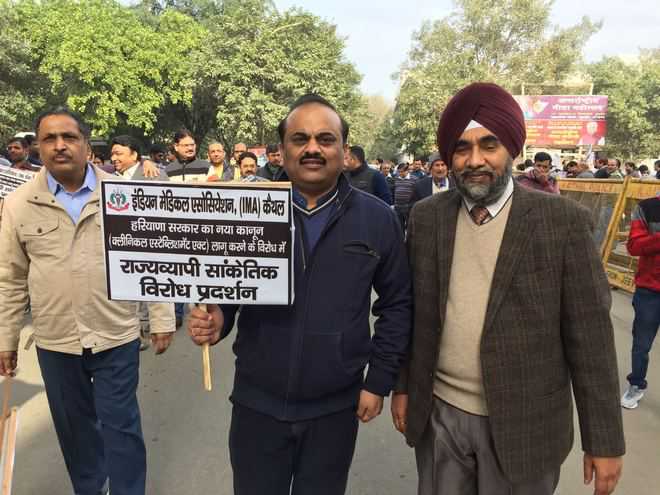 Private hospitals and clinics across the state remained closed today in protest against the state government’s plan to implement the Clinical Establishment Act even as the government has invited representatives of the Indian Medical Association (IMA) for talks on December 21.

Amit Jha, Principal Secretary, Health, confirms that a meeting has been fixed with the state unit of the IMA on December 21 to discuss the modalities for implementation of the Act.

The same day, another meeting has been fixed with representatives of big hospitals such as Fortis, Max and Medanta etc, he says.

The government, it is learnt, wants to implement the Act in such a manner to safeguard the interests of common people without putting doctors in hardship.

Sources say that the government may agree to keep hospitals and clinics up to a certain number of beds out of the purview of the Act.

“The Central Act has its advantages, since the Centre already has a website, a dedicated IT support for registration of hospitals and nursing homes, a complete data of hospitals registered in each state, standard treatment guidelines for 227 diseases coming under 35 specialities, minimum standards of hospitals, cost regulations etc. Besides, the Central Government provides technical and training support and provides two people at the state level and one at the district level for its implementation,” said the sources.

The Haryana chapter of the IMA, however, is not agreeable to the Central Act. “

The draconian central Clinical Establishment Act is not appropriate considering the socio-economic condition of the population of Haryana. Nearly 30,000 trained nurses and compounders working in over 3,500 hospitals and clinics in the state will be rendered jobless,” says Dr Atam Prakash Setia, state president of the IMA.

Doctors march towards mini-sectt in Panipat

Panipat: Around 125 private hospitals in the district remained closed. As many as 430 doctors gathered at Haryana tourism resort Sky Lark and marched in a procession towards the mini-secretariat.

A delegation led by Dr Shyam Kalra, president of the IMA district unit, submitted a memorandum addressed to the Chief Minister, to ADC Rajiv Mehta.

Dr Sant Lal Verma, Civil Surgeon, said, “All doctors in the general hospital were put on alert due to the strike of private hospitals”. Besides, three more doctors were put on emergency duty, he added.

Heavy rush of patients at Kaithal civil hospital  Kaithal: All private hospitals and clinics in the district remained closed, causing inconvenience to a large number of patients. The patients had to rush to the local civil hospital where they had to wait for a long time for a doctor to see them. A woman from Songri Guliana village said that she visited  a local  private hospital but its gates were locked due to the strike. Another women from a village near Pundri said that she had come     for treatment in Kaithal but found all local hospitals and nursing homes closed. Earlier doctors under the banner of the IMA assembled at Pehowa Chowk and from there moved in a procession towards the mini-secretariat. They handed over a memorandum   to Deputy Commissioner Sunita Verma. Dr Vijay Kumar, president of the district IMA unit, Dr MS Shah, Dr Naveen Bansal, Dr Deepak, Dr RP Mann and Dr Raj Rani Garg said that the government should review its decision to enforce the Central Act as it would cause difficulties to doctors and patients as well and make treatment costlier. Meanwhile, CMO Dr Ashok Chaudhary said that  the Government Hospital staff   worked overtime to attend to a large number of patients.—OC