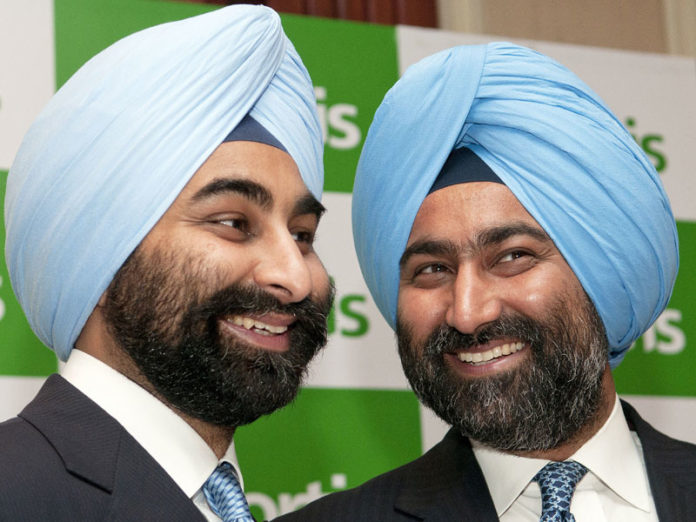 MUMBAI: Shares of Fortis Healthcare, the second largest hospital chain in the country, jumped 18% on a day an international media report said its founders, Shivinder and Malvinder Singh, siphoned off Rs 500 crore from the company.

On Thursday night, the Singh brothers informed the Fortis board of their decision to quit, strengthening speculation that had been raging for months about possible financial irregularities.

Fortis shares galloped when the markets opened on Friday. A damaging Bloomberg report alleging that the siblings took money out of the company didn’t halt the rally. Fortis shares touched an intra-day high of 20% in a tumbling broader Mumbai market. Some traders said there was a scramble for Fortis shares with nearly 1 crore changing hands on BSE on a day of bewildering corporate developments. Shares of Religare Enterprises, also controlled by the Singh brothers, spiked 5% to close at Rs 50.

Investors appeared more relieved at the exit of the controversial brothers than worried about their alleged financial wrongdoings. Analysts attributed the sharp rise in the Fortis counter to the possible re-rating of the stock under a new owner. A combine of Manipal Hospitals and private equity giant TPG was seen close to a takeover deal. TOI first reported on the potential transaction, which missed several deadlines, on February 16 last year.

Manipal has been pursuing an acquisition through a merger deal to abide by court orders, asking the Singh brothers not to sell assets due to Japanese drug maker Daiichi Sankyo’s claim to enforce the Rs 3,550-crore arbitration award. Daiichi won the arbitration after accusing the brothers of misleading it on the Ranbaxy transaction. The Delhi high court dismissed an appeal by the Singh brothers 10 days ago.

Manipal inched closer to a deal late last year but for two major worries — a big hole in the balance sheet and, of course, Daiichi’s arbitration award.

In early November, sources directly involved with the deal informed this newspaper about a possible Rs 900-crore hole in the Fortis balance sheet. By then, the company had sought the first extension from stock exchanges to postpone reporting of second quarter results. The promoters were in the midst of bringing back the funds taken out as part of treasury operations. The financial mess intensified as the hospital chain started defaulting on rentals payable to the Singapore-listed Religare Trust, which controlled the real estate assets.

In a surprise move, Fortis, which was struggling to fix the balance sheet, decided to buy back the Trust. This was an attempt to pause rent defaults claims by a Singapore-listed entity. Fortis also cited this as the reason for delayed second quarter results.

One of the entities of the Singh brothers managed a bank loan against a third-party guarantee, and also mopped up some financing from friends and family to return some of the diverted cash. Still, about Rs 500 crore was needed to fill the financial hole even as the hospital was on the brink of defaulting on staff salaries for December. The promoters of Manipal stepped in with loans to avert a crisis, sources said.

Responding to the news developments, a Fortis spokesperson said, “Fortis Hospitals, a wholly owned subsidiary of Fortis Healthcare, deployed funds in secured short-term investments with companies in the normal course of treasury operations. These entities have become part of the promoter group due to a shareholding change in those entities during the just-ended December quarter. Subsequently, the same loans have been recognised as related party transactions in compliance with necessary regulatory requirements.” The entire amount of about Rs 473 crore is expected to be repaid to the company by the first quarter of next financial year, the statement added.

The Singh brothers and Manipal were awaiting the Delhi high court verdict on the Daiichi arbitration award, which went against the troubled siblings. Sources said that a favourable verdict for the Singh brothers could have accelerated the deal-making.

The siblings told Fortis board on Thursday night they were quitting “in the interest of propriety and good governance” after the adverse court order. There is speculation that the resignation came after the auditor Deloitte gave a heavily qualified report to the board. One of the sources said the auditors refused to give a clean chit to the founders. The Fortis board is expected to consider the second and third quarter results on February 13. There were unconfirmed reports that Deloitte has pulled out as statutory auditors though a Fortis spokesperson denied it. He added that promoters resigned to free the company from any encumbrances linked to them. Deloitte spokesperson, however, said the firm could not comment due to the confidentiality agreement.

As investors thronged the Fortis counter on Friday, one of them even drew parallels with the huge rally in the share price of United Spirits — soaring from Rs 850 to Rs 3,200 — following the exit of fugitive tycoon Vijay Mallya. But there are bankers, familiar with the developments, cautioning about turbulence ahead of the expected ownership change. There are conflicting views whether the exit of founders from the board would speed up a takeover deal or not. If it does, there could be more suitors surfacing suddenly.