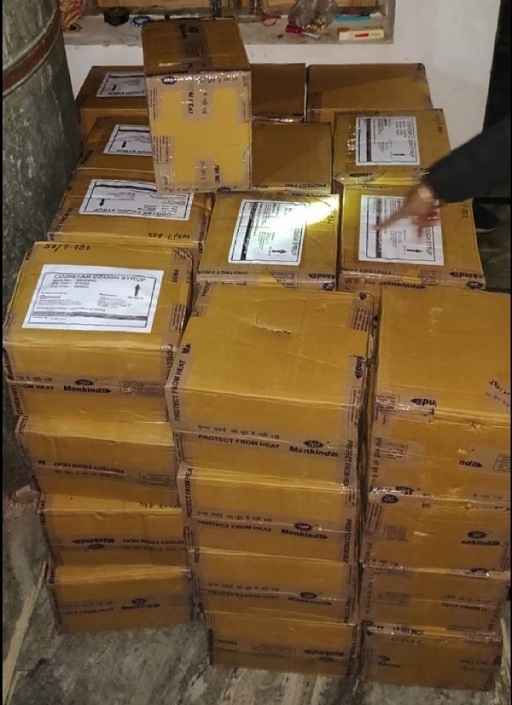 Moradabad : Police and FSDA conducted a joint raid in Bakenia village of Pakbara police station area. During the raid, a huge cache of banned medicines was found from a house. The owner of the house from where the stock of medicines was recovered is absconding. The police and FSDA are looking for the absconding accused. Taking banned medicines in possession, the police have started investigating the incident.

According to Mohit Chaudhary, in-charge of Moradabad police station, Pakbada, information was received from the informer that Zubair Alam, a resident of Bakenia village, does illegal business of banned drugs. A huge consignment of banned drugs is stored at his house.

Realizing the seriousness of the matter, he contacted the FSDA. Drug Inspector Mukesh Chandra Jain and Urmila Verma reached Pakbara police station on the orders of Assistant Commissioner FSDA, Deepak Sharma. From there, in the evening, the FSDA Inspectors team along with police reached the house of Juber Alam, a resident of Bakenia village.

On enquiry, it was found that Zubair Alam was not at home. Zuber switched off his mobile phone after talking to his wife on the mobile phone. In the presence of family members, the team started searching Zubair Alam’s house. A pile of cartoons was found in a room in the west of the house. Codistar Syrup was found in 50 cartons. When questioned about the storage of medicines, Zubair Alam’s wife feigned ignorance. The Health Department team collected a sample of the medicines.

The Drug Inspector further informed that a case regarding the illegally kept drugs would be presented before the Chief Judicial Magistrate. Legal action will be taken against the accused on the permission of the court.